The Mighty Casey struck out when it counted most, but not so for the weightlifter Casey Burgener, and now, with his slot at the Beijing Olympics hanging in the balance, the leaders of USA Weightlifting are doing everything in their power to get this mighty Casey to the 2008 Olympics. 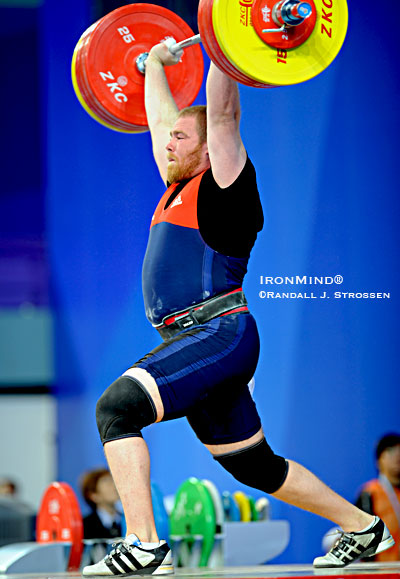 Casey Burgener (USA), shown lifting at the "Good Luck Beijing" Olympic Test Event held at the Olympic venue in January, remains one step from actually participating in the Games - despite earning the slot, first for his team and then for himself. IronMind® | Randall J. Strossen photo.

It reads likes the mercurial script of a surreal play: first the USA men's weightlifting team earned three Olympic slots, based on the team's performance at the 2007 World Weightlifting Championships, a designated Olympic qualifier. Stop the presses, though, because when all the drug tests were completed, the disqualification of some lifters - none from the United States - changed the team rankings, causing the U.S. men's Olympic weightlifting team to lose its precious three positions.

"How could a clean team be penalized because others were dirty" was the obvious and resounding question, one that might end up playing a central role in what happens next with Casey Burgener's fight to get to the Beijing Olympics.

Proving that it's never over until it's over, though, USA Weightlifting hastily sent a team of its top men to compete in the Pan American Championships earlier this year, with the goal of performing well enough that the three slots would be regained - which they were. And, as is fitting, the battle for that third slot on the USA men's Olympic weightlifting team came down to the final lifter at the Olympic Trials, where Casey Burgener, the very lifter who had amassed the most team points at the 2007 World Weightlifting Championships, made the lift he needed to get on the team.

It was a great moment, infused with drama and a sense of poetic justice, but the joy was short-lived because USA Weightlifting was subsequently told that, in fact, it did not have the third men's slot.

With a never-say-die attitude, USA Weightlifting Acting Executive Director Dennis Snethen told IronMind® today, "We are going to arbitration, based on the material sent to the governing body (USA Weightlifting). We are doing everything we can to get Casey that slot."

As the tug-of-war over this slot continues, it's easy to wring hands and join the doomsday brigade, but IronMind® thinks that nerves of steel backed by positive thoughts are better suited for the challenges ahead: "Casey Burgener, lifting in Beijing" . . . say it a few times and get used to the sound.