Glenn Ross handily won the Masters World Strongest Man contest against a lineup that included some other marquee names from the past in strongman. 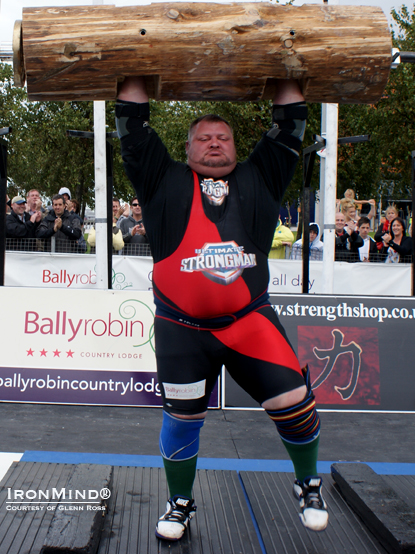 
After edging out Rene Minkwitz on the Truck Pull, Glenn Ross put his shoulder strength on display and won the massive overhead log with 150 kg, once again pushing Minkwitz (who made 140 kg) into second place.

Bouncing back in the Flag Raise, Minkwitz reversed Ross, and this time he won their two-man duel—Minkwitz was the only competitor to lift all five of the poles in what’s like a reverse Fingal’s Finger, or what Odd Haugen calls a Fishing Pole in his contests.

Speaking of Haugen, he rolled away with top honors in the Human Wheelbarrow, and then Ross spanked the field in the squat as he banged out twice as many reps as second-place finihser Stuart Murray.

Stones were the last event, and Ross was once again forged ahead of the rest of the field, as he was the only competitor to load all four.

Asked how he liked the contest, Odd Haugen said that he knew he was getting up there when some of the competitors were young enough to be his son, but the modest 60-something Haugen said he was honored to make the podium, had a great time and understands that plans are already being made for the 2012 edition of the contest.

Here are the final places and scores: