He's supposed to be backing off - or is that slacking off? - since he turned 40, but don't tell that to IFP world champion Brad Gillingham, who has his sights set on pulling a 400-kg deadlift at the Arnold as part of the show USAPL is bringing to Columbus, Ohio next month. 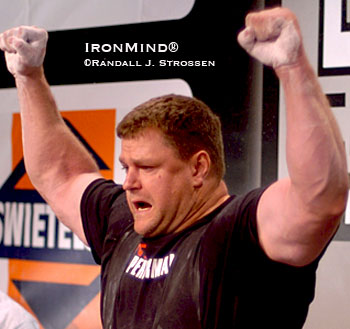 Brad Gillingham gets psyched at the 2007 IPF World Championships, where he pulled a 390-kg deadlift. IronMind® | Randall J. Strossen photo.


Considering that Brad Gillingham was 41 when he won the gold medal in the deadlift at the IFP 2007 World Championships, even some of his fans must have been thinking, "Great way to cap off a great career," but wait, guess who hit a 395-kg deadlift at the 2008 IPF World Masters' Championships? Let's keep things simple: the next point in this pattern is a 400-kg deadlift in 2009 and that is exactly what Gilly is going for at the Arnold, a goal he announced last year, and one that he has been working hard to reach.

"My training has been going good . . . really good," Brad Gillingham told IronMind®, explaining that he has been gradually been pushing up his 5 x 5s lately: hitting 650 x 5 with just a belt in the squat and 755 x 5 in the deadlift, which Brad said is about as much as he's ever done.

So things look solid on paper for the big man from Minnesota, and with the added incentive of prize money and the way he said "the crowd get you pumped up," expect something big: Mark your calendars for Brad Gillingham and the USAPL at the Arnold.