“It was quite a stunning show . . .,” Giants Live managing director Colin Bryce said of the of the strongman contest organized with UFSA in Kiev yesterday, and since Giants Live is the official qualifying tour for the World’s Strongest Man (WSM) contest, the top three finishers were guaranteed invitations to WSM 2010. 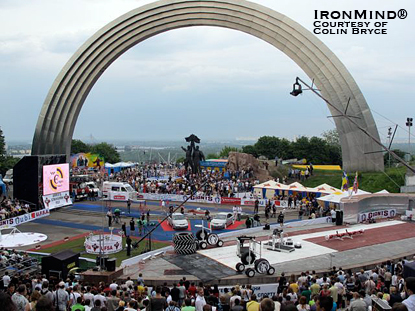 
It was a quite stunning show that Olena, Vlad and the UFSA organised for the second grand prix of Giants Live 2010.  It was right under the "Friendship" Arch in the heart of Kiev city center on Sunday afternoon, May 30th.  Despite the odd flash of thunder and lightning, a truly impressive crowd turned up to see American Derek Poundstone pull out a dramatic comeback to win the competition.

In fact it was more of a strength festival than a simple strongman show in Kiev, with SCL also helping, as they organised an excellent under-105-kg contest between Team Ukraine and Team Europe.  Team Ukraine won in the end by the tightest of margins - just a few squats.  The referees across both contests were the SCL team of Marcel Mostert and Ilkka Kinnunen, who did their usual world-class job.

These were the events:

Please note the deadlift got jacked up to 360 kg in a minute because the lineup of pullers was too good for anything lighter.

Laurence Shahlaei led the contest right up until the 7th and final event, the Atlas stones.  It took every bit of fight in Derek to come back from a poorish start that saw him really struggle with a "heaviest of all time" sled pull.  Derek said after the sled pull that he had never tried harder than the 60 seconds he pulled on the 410-kg sled.  He then had to pull a world record 9 reps at the 95-kg dumbbell (60 seconds) and try and keep his back working in a very hard 360-kg side handle deadlift to help bring him back into contention.

But to prove that he isn’t just a pair of strong legs, Shahlaei didn't just win the Yoke but he also took a share in first place in the deadlift and Viking Press too.  One of the great sights of the weekend was Derek stepping in to help teach Laurence how to do the dumbbell when he couldn’t do one in the warmup.  A classy touch from a man who was a fair few points down at that point.

So Derek, Laurence and Johannes have all qualified for WSM.

The next Giants Live will be at Wembley Arena in London on June 19th - starring none other than the World Strongest Man himself, Big Z.  And if that wasn’t enough for you then he is going to make an attempt at the 2" bar (smooth) Apollon’s Axle world record that Derek owns.  It currently stands at 419 pounds from the Mohegan Sun IronMind® Apollon's Axle™ contest.  I wouldn’t wager against the big man taking it up a few pounds. 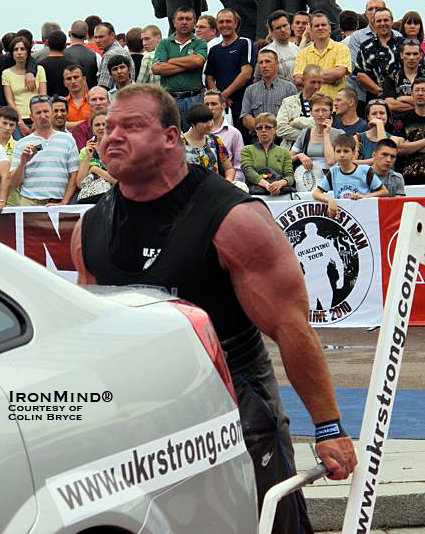 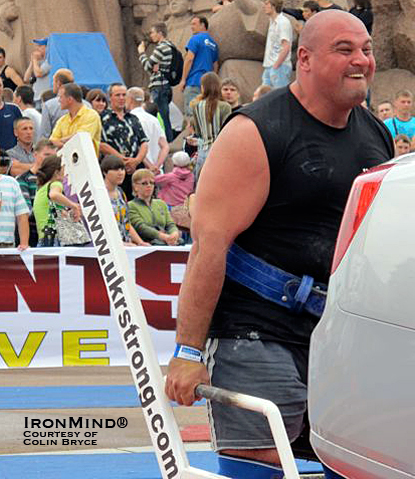