Columbus, Ohio - Following the USA Powerlifting Con-Crete/NutraCea Raw Challenge, the German men's Olympic weightlifting team stepped onto the platform in the Grand Ballroom of the Greater Columbus Convention Center tonight and put on quite a show. 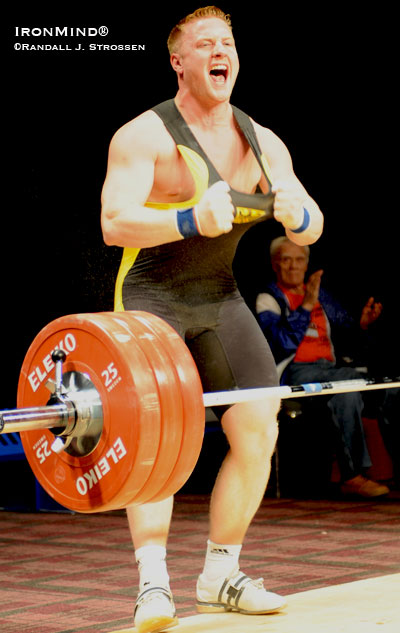 
With Marc Huster announcing and Ingrid Marcum on the program as a guest lifter, German Olympians Juergen Spiess and Almir Velagic wowed the crowd.

Marcum, a top American weightlifter who is also an Olympic prospect in the bobsled, provided a dramatic counterpoint to the two German weightlifters, as she combined great athleticism with a mane of flying blonde hair. Spiess, who is considered a medal candidate for the 2012 Olympics, hit a personal best snatch of 175 kg and a personal best total of 385 kg. Spiess also cleaned 215 kg and had a close miss in the jerk, so he was within range of tacking another 5 kg on his PR total. Velagic had been told by the German Weightlifting Federation that if he totaled 400 kg, he would make the German team for the upcoming European Weightlifting Championships, so the pressure was on him. Velagic succeeded, by making 180 kg in the snatch and 220 kg in the clean and jerk.

The German weightlifters are attending the Arnold to lift in tomorrow's IronMind® Invitational on the main stage of the Expo Hall at 1:00 p.m., and they have been a hit since they reached Columbus. Earlier today, they held a question and answer period at the Strength Summit, where moderator Randall Strossen was quick to praise the German weightlifting team as providing the best model for the USA to adopt for greater success in the sport.

Dr. Christian Baumgartner, leader of the German weightlifting delegation to the Arnold described today's performance by his team as "extraordinary . . . amazing. They are becoming real weightlifters now."

Dr. Baumgartner said that usually when anything is imperfect in the situation, "weightlifters always find excuses for why they couldn't perform their best." Tonight, the Germans waited longer than they had expected as USA Powerlifting worked to reconfigure their primary competition platform to better accommodate the weightlifters.

"Dr. Lawrence Maile, president of USA Powerlifting, won our deepest gratitude," IronMind®'s Randall Strossen said. "They did so many things to make this successful for us. Their venue is exceptional, with excellent staging and lighting, and handfuls of people from USAPL jumped in to help us as we piggybacked on their meet. We could never have done this without Larry and USA Powerlifting."