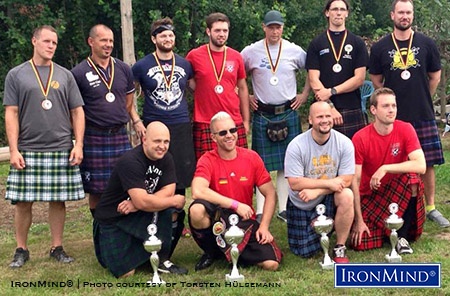 Along with an open class, the official German Lightweight Highland Games Championships were held this past weekend in the picturesque town of Großgoltern, near Hannover, Germany.  Eleven participants were invited to take part in what proved to be a tight competition for the title and podium finish.

The 22-lb. Braemar stone ended with a surprise when Daniel Stolper (Germany) pulled out a best in his final attempt of 34’ 2” to take the lead by a whisker over the leader Torsten Hülsemann (Germany), who had to settle for second place with 33’ 9”. In third was B. J. Ketchum of Lorton, Virginia, USA with 30’ 8”.

The lead changed hands in every round in the 28-lb. weight for distance, with Vasili Panagiotidis (Germany) setting the benchmark throw of 56’ 2” and Stefan Krämer increasing to 58’ 2”. In the last round, Hülsemann, who was in third place, found his groove and propelled the weight to 59’ 1” for the win.

All eyes were on Krämer in the 16-lb. light hammer, as he is considered one the best international lightweight hammer throwers. Stefan, for the first time in his sports career, was using the PVC hammer, and despite dominating with a good margin and a throw of 113’ 9”, he was not completely happy with this result. Hülsemann took second with a best of 94’ 7”, with Stolper taking third with a personal best of 92’ 2”.

The 16-lb. open stone was a skirmish between Stolper and Hülsemann. After being nosed out by Stolper in the Braemar stone, Hülsemann was looking for vindication and that’s what he achieved with a winning putt of 41’ 6”, with Stolper doing 38’ 9” for second and Panagiotidis in third with 36’ 9”.

In the 42-lb. weight for distance, Hülsemann was overtaken by Krämer in the final round with a winning distance of 38’ 2”, leaving Hülsemann in second at 37’ 5”; third place was Panagiotidis with 35’ 9”.

It was another great performance by Krämer in the 22-lb. hammer, as he crushed all comers with a winning throw of 90’ 3-1/2” and also set a new German national record. Hülsemann was second at with 72’ 3”, followed by Ketchum at 68’ 6”.

In the caber, at a challenging 17’ long and 96-lb. in weight, Krämer proved that he was the most masterful caber tosser of the day as the only athlete to turn the stick on all three attempts, with his best a perfect 12:00 toss. Hülsemann fell just short of turning the caber at 90 degrees for second place, which secured him of the overall championships victory. Ketchum placed third with an 80-degree attempt.

Asking Hülsemann about his plans, he noted, “I look to keep it going for the European Championships in Scotland next month, and then in October I am really focusing my energies for the big event in Hungary, the IHGF World Lightweight Championships. I have placed sixth the last three years in a row but hope to make it onto the podium this year.”