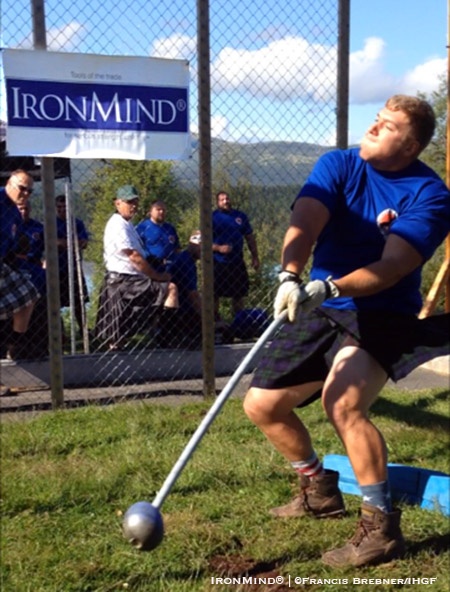 High in the mountains in the magnificent setting of the Fefor Hotel in Vinstra, Norway, and Loch Fefor, 12 athletes from 11 countries competed over two days at the 2017 IHGF Amateur Highland Games World Championships. The athletes looked bigger and stronger than last year and it showed in their overall performances, with many establishing personal bests. The atmosphere was high, along with the vigor of the athletes as they warmed up.

In the 22-lb. Braemar stone, Randolph, who has a background in shot put and hammer and is trained by one of the world’s leading Highland Games coaches, Ryan Vierra, once again delivered a majestic series of throws all over 40’ to set a second Fefor field record of 42’ 4-1/4”, surpassing the old record of 39’ 9” set by Poland’s Rafal Kobylarz in 2016. Second place was a tight competition between Johan Longhurst (Netherlands) and Gunn, with Longhurst marginally going ahead of Gunn at 41’ 2-3/4”, leaving Gunn in third at 41’ 3/4”.

The 56-lb. weight-over-the bar was a highlight for setting personal bests. The bar started at 13’, and only three athletes cleared the bar at 15’ to move on to the height of 15’ 7” and then 16’ 4-3/4” where Longhurst, Randolph, and Glenn Nys (Belgium) gave their all, but only Longhurst cleared for the win. On countback, Nys took second place, with Randolph third.

The final event of day one was the caber toss, with a caber 18’ long and 130 lb. The title of IHGF Amateur Caber Tossing World Championships was also up for grabs. Longhurst, the defending champion, showcased extreme overall power as he slammed the caber with a best of 12:15 for the win, retaining his title. Patrick Van Antwerpen (Netherlands) took second with 12:30, followed by Gunn with a 70-degree attempt.

Newly crowned champion Randolph said of his win, “Having coach Ryan Vierra in my corner was my biggest attribute. I won six out of eight events and set six personal bests. I just could not have asked for anything more. Without Coach Vierra and his constant guidance over the last year in preparation for this World Championships, I just could not have done it alone—I owe a lot to him. To win with my family here in Fefor supporting me was uplifting and something special that I will remember for the rest of my life.”

The IHGF would like to thank Anne Grethe Horten of the Fefor Hotel for hosting another superb IHGF Highland Games World Championships and for all her support given to building the future of the sport and its athletes.