Hjalti Arnason told IronMind that his documentary on the late Jon Pall Sigmarsson "is doing well" and he hopes to have the movie ready in the next year. 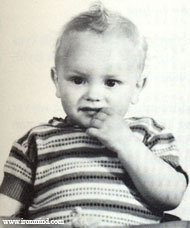 Jon Pall Sigmarsson as a child. At this stage, who would have guessed how his life would unfold? IronMind® | Photo courtesy of Hjalti Arnason.

This is an ambitious project, such as has never before been seen in the world of strongman, but nothing less is fitting for the superstar Jon Pall Sigmarsson - the man whose fans revered him above all others and of whom IFSA founder Dr. Douglas Edmunds said, "I loved him like a son."

Hjalti Arnason is uniquely qualified to tackle such an enormous and significant film as he is a former world-class strongman and powerlifter himself, his skills as a producer have won high praise from his colleagues, and, crucially important, he is a fellow Icelander.

Because Arnason is an insider with passion equal to his project, his documentary, among other things, is recreating Jon Pall's youth, which included not just the usual fare of hard work that you might anticipate, but also drinking seal's blood for sustenance . . . "not the worst meal in those days," according to Arnason.