The Fortissimus Steering Committee has officially raised the total prize money to US$62,000 committee head Paul Ohl told IronMind® today, with US$14,000 going to the winner. 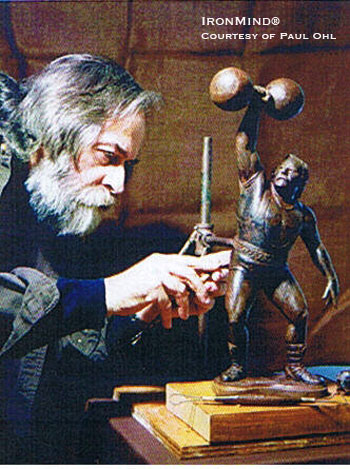 The remaining slot (wild card) will be filled on April 15.

Paul Ohl, whose biography on Louis Cyr is in a class by itself in the field, provided this background detail on M. Binette's work: "It features Louis Cyr hoisting the 273-1/4-pound dumbbell, the greatest one-arm press ever, accomplished on the evening of January 19, 1892, at the Royal Aquarium Hall of London, UK, in front of a sell-out crowd of 5000. This unique piece of art has been casted and produced by the Inverness Bronze Museum, near the city of Quebec. It weighs 14-1/2 pounds (over six kg) and measures 20 inches (50 cm)."