Montmagny, Québec - The Fortissimus opening banquet last night featured the many elements that came together to allow what had once sounded like a far-fetched dream to take solid form in a small Quebec town - a town with the vision and the faith to create and host a strongman contest unlike anything ever seen. 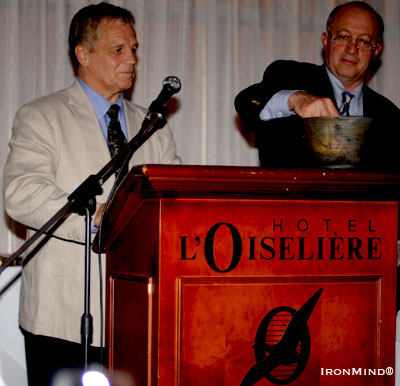 Under the watchful eye of Paul Ohl (left), head of the Fortissimus organizing committee, Randall Strossen (right) draws the names to determine the order for the first event. IronMind®

IronMind® was quick to recognize the huge potential contribution such a contest could make to strongman, and the very idea of an independent competition based in Québec was one we found very exciting. The plan developed by Paul Ohl gained traction and over the coming months, a start list of the world's elite strongmen was assembled.

Last night, Notre-Dame-du-Rosaire Mayor Carl Dubé explained how the focus is usually on large cities, but that little towns like Montmagny can also do great things, and Paul Ohl summarized the journey that led from his initial conversations about Fortissimus to the contest that begins today.

Magnus Samuelsson, Zydrunas Savickas and Randall Strossen were inducted into the Louis Cyr Hall of Fame at last night's banquet - Samuelsson and Savickas for their accomplishments as athletes, and Strossen for his work as a journalist and photographer.

Here is the starting order for the first event, the Sigmarrson deadlift:

And, even though the first event in this year's competiton is still hours from beginning, discussions about Fortissimus 2009 have already begun. For now, though, sit back and get ready to enjoy the show. 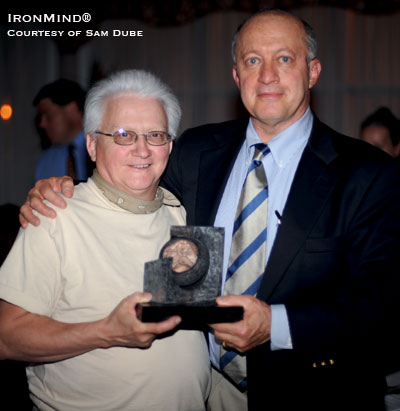 Sculptor Germain Desbiens (left) very kindly took a moment to explain to Randall Strossen (right) some of the key features he incorporated into the design of the Fortissimus Hall of Fame awards. IronMind® | Photo courtesy of Sam Dube.