In a prepared statement, Fortissimus World Strength announced its adoption of the "Louis Cyr trophy [as] the official symbol of the strongest man on earth," the label it applies to the winner of its strongman contest. 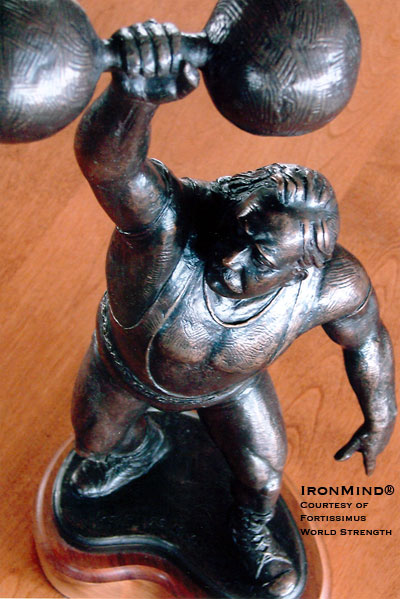 The Louis Cyr Trophy, as created by Michel Binette, goes to the winner of Fortissimus. IronMind® | Photo courtesy of Fortissimus World Strength.


Following is the statement in its entirety:

These measurements were taken in June 1895 by this professor emeritus of Harvard University. More than a century later, the renowned Canadian sculptor Michel Binette used these exact figures on a reduced scale and created the Louis Cyr memorial referred to as Fortissimus, the Strongest.

The bronze statuette shows the legendary strongman about to lock out a 273-lb. iron-cast dumbbell, on the evening of January 19, 1892, at the Royal Aquartium Hall, in London UK.

Measuring 21" in height, at a weight of 13-1/2 lb., this unique piece of art will now become the official symbol of the Fortissimus Strongest Man on Earth. So has it been decided by Fortissimus World Strength at its last Directors' meeting.

The statuette is being casted at the Inverness Museum of Bronze, the only museum of sort in Canada.