“From the start, in October 2007, FORTISSIMUS WORLD STRENGTH had made a commitment to taking the sport of strongman to another level,” opened the prepared statement Fortissimus released to IronMind® today. 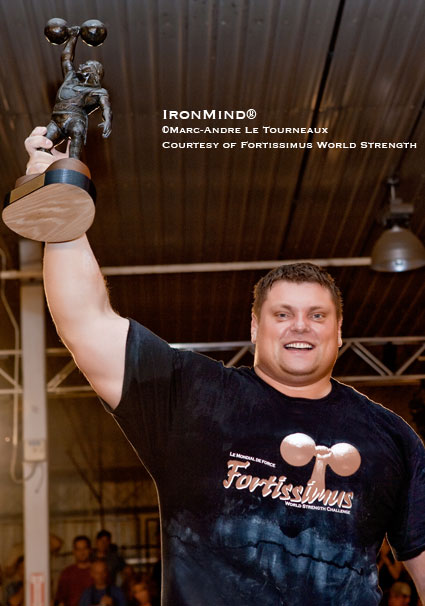 
“It began in 2008, with the Louis Cyr World Strength Challenge and it went a step further in 2009, with Fortissimus Strongest Man on Earth,” continues the statement:

“After reviewing the official results, supervised by Dione Wessels, president of the American Strongman Corporation, and Liette Latreille-Lauzon, senior scorekeeper of Fortissimus 2009, FORTISSIMUS WORLD STRENGTH announces that a total of six world records of strength have been established.  Four by Zydrunas Savickas of Lithuania, one each by Derek Poundstone and Brian Shaw of the the United States.

“By the facts and figures Fortissimus 2009 succeeded in bringing the sport of strongman to new standards.  This has to be good news for the world strength community and to the upcoming international strength athletes.

“This competition will go down as one of the greatest encounter in strongman bar none.  A perfect match between two of the best ever: Zydrunas Savickas and Derek Poundstone.  The results of Fortissimus 2009 show without any possible doubt that Zydrunas Savickas was near perfect in getting 124.5 points out of 140.  He won six out of 10 events, averaged 93% of  successful lifts, got four world records and won the ultimate title.

“Such accomplishments must be highlighted in  the history of the sport of strongman,” concluded the statement.