“I am not sure if it is appropriate to say that ‘I am proud to report on behalf of a courageous bunch,’ but I will nevertheless say it!” Fortissimus 2009 president Paul Ohl told IronMind® today. 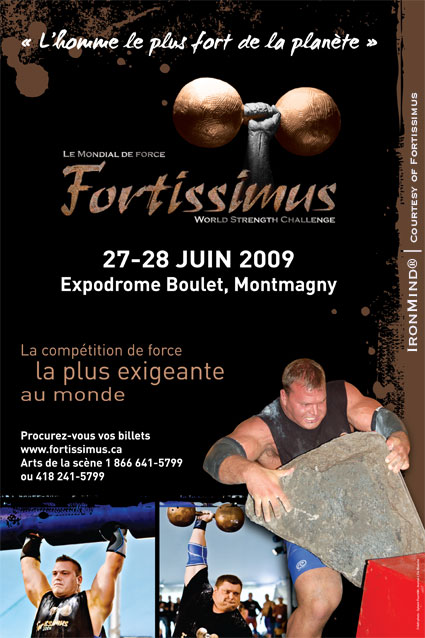 Fortissimus 2009, the contest that is setting new standards in the strongman world, is rapidly approaching.  IronMind® | Poster courtesy of FORTISSIMUS WORLD STRENGTH/artwork by Julie Payeur.


“We are damn proud given the harsh economic situation to bring the ship safely to harbor," Paul Ohl continued.  "It wasn't without bumps and bruises, and with some more to come, but at least we will deliver.”

And what M. Ohl and company are delivering is Fortissimus 2009, a strongman contest quite unlike any other.

The following press release, a special to IronMind®, describes what all the excitement is about.

Paul Ohl, president of FORTISSIMUS 2009 reports that athletes, equipment, officials and staff are ready for the launching of 2009 FORTISSIMUS Strongest Man on Earth, to be held in Montmagny, Québec, Canada, on June 27-28, 2009.

“For us, this will be the total package, Ohl reports.  With the legacy of Louis Cyr in the background, we will also honor such legends as Bill Kazmaier, Jon Pall Sigmarsson, Donald Dinnie, the Baillargeon Brothers, by having events named after them.  And, as a bonus, we will hold the IronMind®’s Rolling Thunder® World Championships, with Mark Felix defending his title.

“The field is huge and, most important, all-inclusive.  FORTISSIMUS 2009 has enjoyed tremendous cooperation from the Strongman Champions League, The Australian Federation of Strength Athletes, the Professional League of Power Extreme of Russia, the American Strongman Corporation and IronMind® Enterprises.  This was the key to getting such a competition on track and give it worldwide exposure.”

In a prepared statement, FORTISSIMUS 2009 reports 14 world-class competitors confirmed on its starting field, 10 events, an overall poundage of 16,447 lb. (7,476 kg), with two world record-breaking challenges (IronMind Overhead and Slater King of Stones) that will account for 43% of the total poundage.

“This could be the greatest field ever,” adds Paul Ohl.  A look at the track records of the contestants shows multiple Arnold Strongman, World Championships, WSM,  America, Europe, Russia, Britain and Australia wins at their credit, adding 25 world records established by these athletes (Savickas, Poundstone, Murumets, Ortmayer, Boyer) in 8 different events over the past 5 years.

“The events will equally test static strength, explosive power, grip and stamina and will be up by some 20% over last year’s competition.  That will be an all-time high.  With that put in perspective, the winner of FORTISSIMUS 2009 will become, by the tale of the tape, the Strongest Man on Earth.”

With two weeks left and the clock ticking, tickets can be purchased at the Fortissimus website.