Los Angeles - Ryan Bakke kicked off the Gaspari Nutrition All-American Strongman Challenge by setting a new world record in the Apollon's Axle overhead lift, getting 185 kg from the ground to arms' length overhead at the FitExpo today. 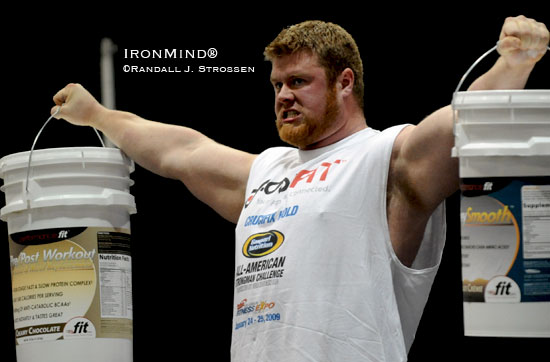 Marshall White won the dotFIT crucifix hold; that win, along with his fourth place in the Axle and and Farmer's Walk, put him in the lead after the first day of the Gaspari All-American Strongman Challenge. IronMind® | Randall J. Strossen photo.


Brian Shaw and Pete Konradt tied for second in this event, both making 180 kg.

Marshall White overpowered the rest of the field on the dotFIT Crucifix Hold, easily winning the event. Pete Konradt was second, followed by Kevin Nee.

The third event bore the imprint of contest organizer Odd Haugen, as the farmer's walk went from heavy to heavier to heaviest in a three-implement, three-stage event that started with a pair of 325-lb. suitcases, used a pair of 385-lb. cylinders next, and then finished with an 880-lb. frame. Brian Shaw won, Nick Best was second and Travis Ortmayer was third.

After the first day of competition, here are the top six: