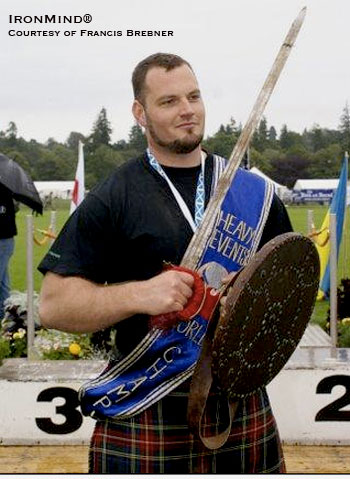 Gregor Edmunds added another feather to his cap by winning the Fergus Highland Games. IronMind® | Photo courtesy of Francis Brebner.

The Fergus Highland Games saw an awesome assembly of international athletes with Gregor Edmunds and Larry Brock fighting it out over the two-day championships in torrential rain.

Scotland's Gregor Edmunds, along with Steve Aitkin and Stephen King, were flying the flag for the country; for Canada it was Greg Hadley, Jason Johnston, Christoph Wand and Markus Wand; and from the USA, Ryan Vierra, Larry Brock, Sean Betz, and Harrison Bailey III.

In the opening event with the 25-lb. open stone, Gregor Edmunds, with a crushing putt of 41' 7", claimed the first win of the competition, leaving Sean Betz in second place with a throw of 37' 11" and Ryan Vierra just behind in third place at a distance of 37' 1".

All eyes again were on Edmunds in the 56-lb. weight for distance, and with a throw 42' 1", he snatched the win over Larry Brock, who had to settle for second place in his favoured event with a throw of 41' 3"; Jason Johnston was in third with 40' 1".

The 28-lb. weight for distance was an exciting event between the top three, with the win finally going to Larry Brock with an 80' 9" throw; Edmunds was in second with 78' 11" and Harrison Bailey in third with 76' 9".

In the 22-lb. hammer, it was a truly great battle between Scotland's former hammer world record holder Stephen King and Larry Brock, with the win eventually going to Brock with a 112' 7" throw; King took second place with 111' 2" and Edmunds third with 106' 8".

The 56-lb. weight for height was won by big Dave Brown on countback with a toss 16', with Canadians Jason Johnston and Christoph Wand tying for second place with 16' also.