"FORTISSIMUS 2008 is absolutely thrilled with the large response it received as a result of IronMind®'s poll," said Paul Ohl. "It went beyond all expectations." 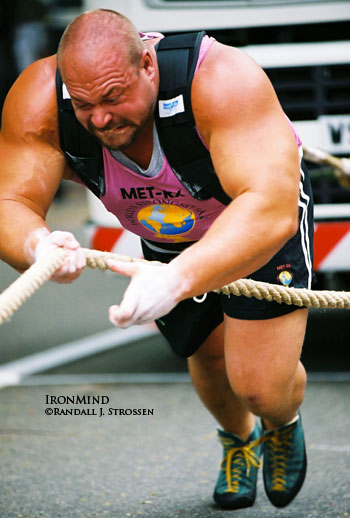 Quebec's own Hugo Girard, embodying the very face and force of a traditional strongman, figured prominently in the recent poll of top strongmen worldwide. This is a particular strong testament to Girard's stature in the strongman world because this high ranking arose despite his limited ability to compete recently, following two very serious back-to-back injuries. IronMind® | Randall J. Strossen, Ph.D. photo.

"The results of the poll show that the strongman world, regardless of nationalities or organizations, has spoken loud and clear," Ohl continued. "It has massively recognized that strength athletics should seek new ways to revive the tradition of strength challenges, thus supporting the concept of engaging the top of the crop in an extreme strength meeting, with no limitations or restrains.

"To that effect, FORTISSIMUS 2008 will do what has to be done in the coming weeks in order to offer the strongman world a brand of excellence in genuine Louis Cyr-fashion.

"The steering committee has decided the following, based on the results of IronMind®'s poll and an initial list of 20 world-class strongmen that it was already considering as potential competitors," Ohl said. "The list carries 12 names (in alphabetical order) and one host's wild card to be named with the final selection. That final selection will be the result of a point system based on the following:

Paul Ohl also reported that FORTISSIMUS 2008 will release its final list before December 15, 2007.