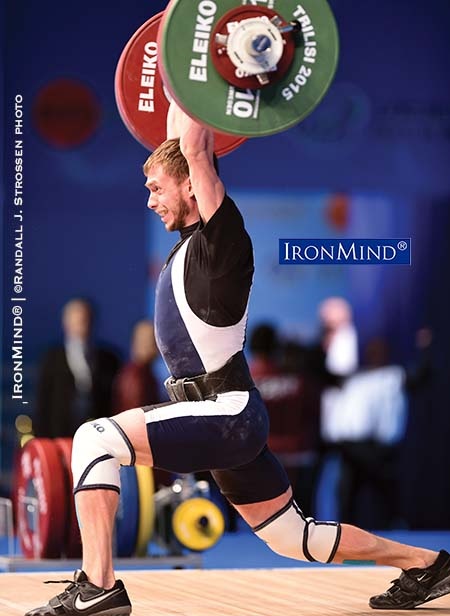 With this wide, deep split, Oleg Sirghi stuck the jerk on 151-kg, good for the gold medal in both the clean and jerk and the total in the men’s 56-kg class at the 2015 European Weightlifting Championships. IronMind® | Randall J. Strossen photo

Results in the men’s 56-kg category lacked the lofty standards of the days when Halil Mutlu (Turkey) was competing, but that didn’t mean there was a lack of competition. The gold medal in the snatch was decided on bodyweight, with Josue Brachi (Spain) edging out Mirco Scarantino (Italy). Ismet Algul (Turkey) won the bronze with 114 kg, four kilos behind Brachi and Scarantino.

Scarantino had the bar overhead but couldn’t hold the jerk on his opener, 140 kg, but he went up one kilo on his second attempt and made a good lift. Smbat Margaryan (ARM) made 142 kg on his open, and Oleg Sirghi, stalking the gold medal in the jerk and the total, made a good 143-kg lift on his first attempt. Scarantino had 145 kg overhead on his third attempt, but didn’t get the down signal before he finally dropped the weight—Scarantino expressed his displeasure and his coach approached the jury about the decision, but to no avail. Margaryan made 146 kg on his second attempt.

Sirghi had a good 147-kg lift on his second attempt, for gold medal position in the jerk and the total, and when Margaryan missed the jerk on 151 kg, Sirghi showed the weight was no problem for him as he nailed it.

When the dust had settled, Sirghi won the gold medal in the total with 264 kg, Margaryan got the silver medal with 259 kg and Scarantino settled for the bronze medal—losing the silver medal on bodyweight.