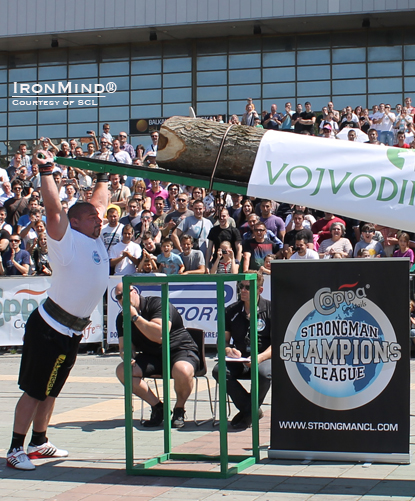 The SCL Serbia strongman contest took place today in city of Novi Sad.  The Major fixed us a beautiful place center of main city center and around 6000 people cheered the athletes in sunny and around +30 C (86 F) weather.

There were total of six hard events:

Serbian hero Ervin Katona took 4 first places and in a fifth, was tiedwith Etienne Smith and Lauri Nami.  Ervin Katona also made a new World Record of 13 reps on the 165 kg Viking Press!  The old one was done by Zydrunas Savickas 12 reps, done this year in IceMan III.
The last event, Conan’s Wheel, was won by Lauri Nami from Estonia.  With that result he went from 6th to 3rd place overall, because Warrick Brant passed out already after 10 meters with air problems and Laurence struggled as well with the Conan’s Wheel.

It was a very exciting finish for second and third place in the end, when Ervin Katona was already safe with his overall win.

In the overall ranking we have 3 leaders now in the Coppa Strongman Champions League, with 50 points total: Zydrunas Savickas, Laurence Shahlaei and Ervin Katona!

These are the official overall scores: