Strongman Champions League (SCL) co-founder Marcel Mostert, freshly back from the SCL competition in Serbia, filed this report on Ervin Katona's torn biceps, and how strongman competitors should modify their training to avoid becoming the next casualty. 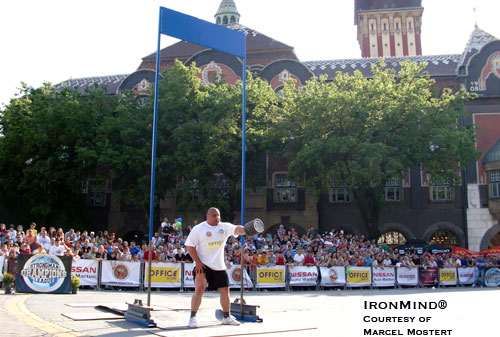 Ervin Katona, shown competing in Serbia last weekend, was the latest strongman to tear his biceps. SCL co-founder Marcel Mostert discusses the injury and how strongmen might avoid it. IronMind® | Photo courtesy of Marcel Mostert.

Ervin Katona gets operated on today in Hungary, as his left biceps was totally torn off during the Atlas Stones of the SCL competition in Serbia. The event, a 210-kg Atlas Stone for reps, was too much for his biceps and it was torn after the second rep. In his country, Serbia, he could not find a good specialist, so he went to Hungary [for the operation]. There, they assured him it will be 100% again, but it needs the normal recovery time of six months.

The season has just started and I have seen already three big biceps injuries these last few weeks. In the Holland Nationals Qualifications 2009, two weeks ago, an athlete's biceps went off with the wheel flip. At the FIBO SCL Qualification, Tobias Ide, the German champion, tore his biceps, which will take him out for 5 to 6 weeks. And last weekend it went wrong with the biceps of Ervin Katona.

The strongman sport is definitely a dangerous sport for biceps. But, also I see a lot of strongman competitors make the same mistakes. You should protect your biceps.

First of all, if you feel problems, little pain in your biceps for longer than two months, it's a sign that a fatal rupture might come. So, take a break!

Second, a real killer for strongman biceps is . . . biceps training! This is what some strongmen do too much. Strongmen are not bodybuilders, so please to all strongmen: stop training your biceps! It kills them!

Because with all the events strongman competitors do, the biceps has a hard time anyway. So, please stick to that, and you can be free for any biceps problems. It's just a very good tip to remember . . . and you all out there are NOT bodybuilders!