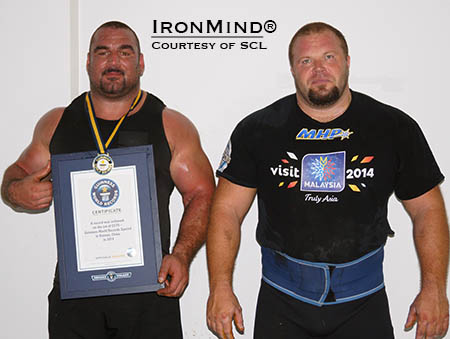 “The challenger, Lauri Nami, did not succeed in his try; unfortunately, he is suffering from a hamstring injury.

“This was third time this year, that SCL athletes have been invited to attempt Guinness Records: At the beginning of the year, Thor Björnsson and Mike Burke were in Shanghai doing new records in the weight for height, and then in June–July, Thor and Zydrunas Savickas were n Italy filming for a month. A lot of new records and lot more to come.

“Next weekend is MHP SCL Zambia in Lusaka, so stay tuned for more news here on IronMind,” said Kinnunen.