Thanks to Boris Kirshin and Sergey Klimakov of the Chelyabinks Worker newspaper, we are pleased to present a "translation made specially for IronMind" of an interview with Elbrus Nigmatullin, who is set to compete in the 2007 World's Strongest Man contest - which begins on Saturday. 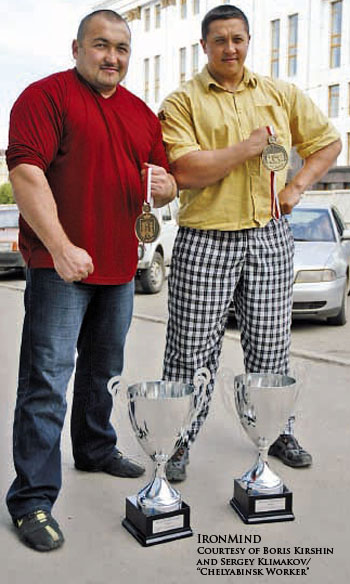 Elbrus Nigmatullin (EN): Last year the strongest athletes were in my subgroup and they closed my road to the final. I lost one and half points to Phil Pfister and Mark Felix . . . I hope this time Lady Luck will smile on me!

CW: Do you know any other candidates for the World Championship?

EN: There are only three world level athletes: I, Michael ["Misha"] Koklyaev and Igor Pedan. But we are in different strongman camps. Michael and Igor are the Russian Strength Extreme League, which is working with International Federation of Strength Athlete (IFSA). I'm in the anti-IFSA camp. We have different world championships. In the nearest future I'm going to "The World Strongest Man" in USA and Koklyaev is going to the IFSA World Championship in South Korea. It is still unknown if Pedan will take part in this competition or not [IronMind®: Pedan did compete in the IFSA World Championships, which are underway at the moment, but he just barely missed advancing to the finals from his semi-finals heat]. No other Russian athletes, including athletes from Chalyabinst, have the world championship level. I think, only once Alexey Serebrykov successfully took part in international competitions. Dmitryi Kononez took part three times in some stages of World Cup (with my assistance) and he was on the sixth-eighth places. But those results are not enough to participate in the world championship.

CW: Who is your main sport rival?

EN: I acknowledge that only Michael Koklyaev is the main rival in Russia. In this case, besides the sport rivalry I also have some private things. In 2004 when he didn't participate in the Olympic Games and was on the crossroads: to stay in the weightlifting or not, I carried him to the strongman. During that year I was his teacher, I opened to him all the "cuisine" of this sport, and I introduced him to the main people. I wanted to be the hero trainer, because Michael is really strong, hard-working and I believed in him. And then there was the common sport history. Michael signed the contract with Vladimir Turchinskij League without me, [while] I was [at the] Chengdu Championship. I thought he'll let me know beforehand. In short, my alumnus became my first rival. The League doesn't need my name in his sport history; it seems like there was no Nigmatullin in his sport career. Nevertheless, Michael thanked me in some interviews. Today I'm in another camp. Last time we met on the "Russian Strongest Man Final 2005" and I won him. It was the most significant victory in my life. I won like Zhukov won the battle of Moscow. I proved that I'm not the past stage of Michael sport history, I'm his main rival. But, in spite of that fact, we are in good relations with Michael. Nowadays due to the regular telecasting on "Sport" channel, people think that Koklyaev is the monopoly in Russian strength extreme. But it's not so, and while I participate he knows it.

CW: Is it hard for you to maintain your image without championship telecasting?

EN: The competitions in which I regularly take part also have the broadcasting. But not in Russia. Mainly they are shown on "Eurosport," (about 50 countries broadcasting) "Fox Sport," "ESPN" many national channels buy and show it. Today I think I'm equally famous in Russia and abroad. After "The World Strongest Man" in Chengu, I've found my photo on the Washington Post site. Last year after Hainan - they noticed me in Times. And here's the recent case. Early in the morning Shamil Sultanov, the State Duma deputy, is calling: "Elbrus, I'm in Algeria with my Arabian friends. We are watching you on the TV and they are interested in working with you, they have some projects." There are two elite Asian strongmen, I and the Iran one. Recently, I was in Moscow and people from news office "Al-Jazeera" promised to shoot a plot about me. Now I'm learning English language, I'm writing on the foreign sport forums. I also take part in Russian regional competitions, for example "Baikal Hercules" in Irkutsk, to stay in good form. Last year I was also interested in vehicles traction: two Russian records - track-pulls of bus coupling and motor sip on Moscow River. But there should be the limit. For example, Dmitryi Kononez accommodates himself to set "world records" every week in the regional centers of our district.