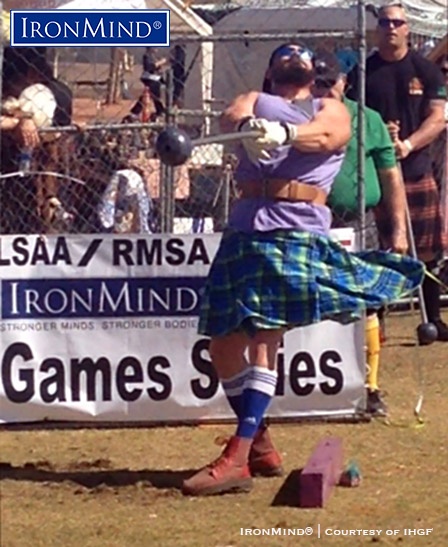 Wins on both hammers helped to power Eddie Brown to victory at the Phoenix Highland Games. IronMind® | IHGF photo

The Phoenix Highland Games celebrated its 54th year of consecutive games with a lineup of 115 athletes across several classes, cheered on by several thousand spectators as ground and world records tumbled.

The 56-lb. weight over bar was an impressive show by Brown, who cleared 16’ for the win, with Heaton second at 15’ and Thompson third at 14’.

The 20-lb. sheaf toss ended in a several-way tie with all but Steele clearing the height of 23’.

In all, the games were fantastic and the athletes in top form. Karl Gehrke, in the men’s lightweight division, established 7 ground records, and in the woman’s lightweight A class, Anniki Chamberlain set 2; in the women’s masters 60-plus division Michelle Crownhart set a new world record in the heavy hammer and in the masters 50-plus division, Mona Malek set two new world records, in the weight over bar and the heavy weight for distance.

Special mention must be given to Texas pro athlete Spencer Tyler, who, that same weekend in Columbus, Ohio at the Arnold Classic Highland games, had an all-round world-class performance and set three new indoor world records: the 56-lb. bag/ball for distance at an incredible 51’ 1/2”, the 56-lb. weight over bar at 19’ 3”, and the 18-lb. rubber shot open stone for a distance of 57’ 9-1/4”.