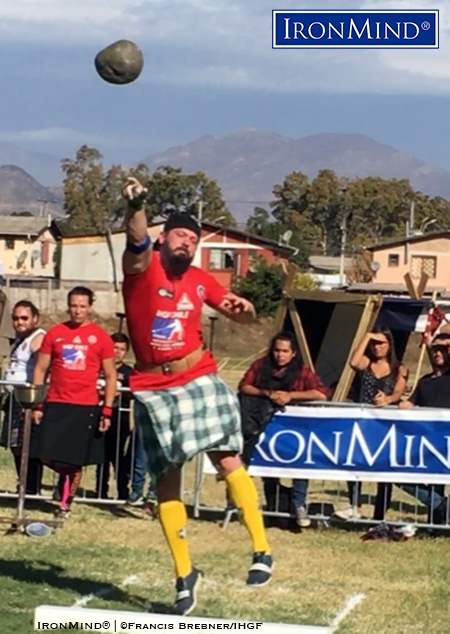 Eddie Brown (USA) on the Braemar Stone, one of the events he won, along with the overall title, at the 2018 IHGF Chilean Highland Games. IronMind® | ©Francis Brebner

The inaugural IHGF Chilean Highland Games, staged in Santiago, Chile, was a great success. The games were attended by the mayor of San Bernardo Santiago de Chile, Mrs. Nora Cuevas Contreras, and vice-mayor Mrs. Lorena Oviedo, who officially opened the games. The Santiago Metropolitan Pipe Band played throughout the day, creating a great atmosphere. Seventeen athletes competed, from all over Chile as well as from Uruguay and the USA. In the A group spectators witnessed an exciting competition, as home favorites Manuel Angulo and Mauricio Vivallo put up good all-round performances against USA’s Eddie Brown, Andrew Heaton and Richard Campbell.

In the 56-lb. weight for distance, Brown threw a series all over 34’, with his best at 34’ 5” for another victory. Heaton followed with 31’ 2”. Third place was a skirmish between Joaquin Ballivian and Vivallo, with Ballivian taking third by a whisker with 25’ 3” to Vivallo’s 23’ 2”.

The IHGF would like to thank Mauricio Vivallo and Enrique Araya Gonzalez for their hard work in putting together this major international event and looking after all the athletes during their stay in Chile. The IHGF looks forward to returning to Chile in 2019 and working with Club Highland Games Chile to grow traditional Highland games and promote it with zeal.

The next event on the circuit will be the Las Vegas Highland Games, April 14–15, the third leg in the IHGF All-American Highland Games qualifying series.