Dubai - Ashgar Ebrahimi (Iran) uncorked three good snatches and never looked back as he won all three gold medals in the 94-kg category at the Asian Weightlifting Championships today. 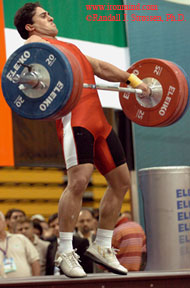 Ashgar Ebrahimi (Iran) at the top of his pull on his opening snatch (165 kg) at the Asian Weightlifting Championships today in Dubai. IronMind® | Randall J. Strossen, Ph.D. photo.

Starting after everyone else had finished, Ebrahimi made a very nice 165-kg snatch on his opener, and then he followed it with an equally nice 170 on his second attempt. His third attempt, 175 kg, was just as good, although not quite as easy.

The young Iranian lifter had his even younger teammate Ali Deghanian to contend with in the clean and jerk, although there wasn't quite enough pressure on him to force him up to his top weights.

Ebrahimi opened with a successful lift at 195 kg, and Deghanian responded with 196 for his opener, also making a good lift. Sergey Sedov (Kazakhstan) was the only other lifter left at this point and he also took 196 and made a strong-looking lift for a good third attempt, power jerking the weight with authority.

Deghanian took 203 kg on his second attempt, for a good lift and the junior Asian record in the clean and jerk, and Ebrahimi made a solid 205 on his second attempt, although the weight was slowing down as he stood up - Ebrahimi noticeably sets his back before the jerk and he rammed the weight overhead. Deghanian called for 206 on his third attempt, but could not rack it, and, with all three gold medals in hand, Ebrahimi passed on his third attempt.

Following the two Iranian lifters, Sedov got the bronze in the total for his 356. 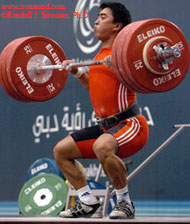