The colossal Dublin Irish Festival continued its tradition of putting the Highland Games heavy events front and center—Francis Brebner was the field and he has called the action for IronMind. 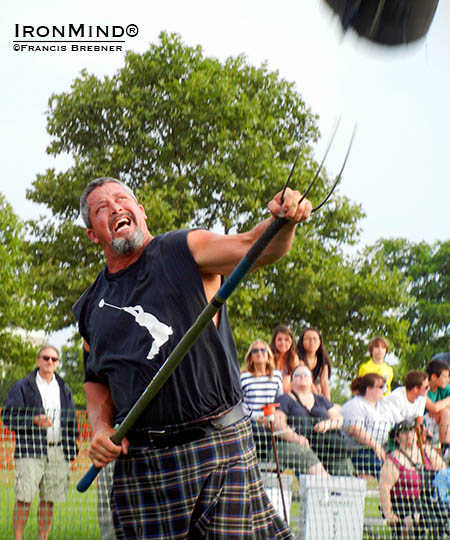 The Dublin Irish Festival, which takes place in Dublin, Ohio, is the second largest festival in the world and is rapidly growing each year. The festival celebrated its 27th year, with more than 100,000 spectators on hand to experience the energetic atmosphere of festivities which lasted for several days, on 7 stages, with 65 acts and over 500 performers. The sheer size of the festival is astounding, and each year more acreage is added, now covering 38 acres in Coffman Park.

An epic event with something for everyone, a festival highlight was the kids’ Celtic games, with droves of youngsters getting in on the action with the tossing of mini-cabers, putting stones and tossing the sheaf over the bar. Even the mums and dads tried their hand at throwing for the first time, and one family had three generations giving it a go, with a grandma over eighty years as well as her daughter and granddaughter tossing the caber.

Athletic director for the Dublin Irish Festival and president of the Great Lakes Scottish Athletes Association Brian Huntley and his crew did an exceptional job of making the Highland Games a huge success once again, with everything running like clockwork. Thousands of spectators crowded the arena and really got behind the throwing events from start to finish.

Four athletic groups, consisting of amateurs A and B, masters, and women, competed.  In the masters (over 40 years old), Braidy Miller put up an outstanding performance, establishing a new world record of 39’ in the 16-lb. sheaf over bar, shattering his old record of 38’ 4”.  Braidy later attempted a very close 40’.  Other results from Braidy were over 82’ in the 28-lb. weight for distance and over 111’ in the heavy hammer.  Brother Brent Miller put up a fantastic all-round performance, winning the masters 16-lb. open stone with a putt of over 51’ and attempting a world record 20’ 8” in the 42-lb. weight over bar.

The finale was the 16-lb. sheaf event, and Thomas wowed the crowds with a first-class throw of 35’; Urquhart did 32’ for second and J. Baker 30’ for third.