The black hat he wore when refereeing became his mark, along with his quip, “We can’t be fair to everyone,” but even his biggest critics have a soft spot in their hearts for Douglas Edmunds, aka Dr. Death, the Godfather of Strongman. 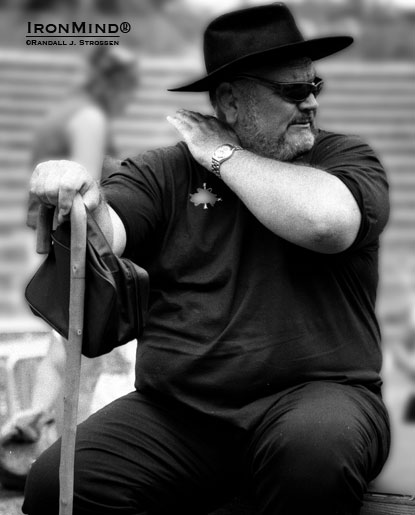 “Get me a cold one and be fast about it!” seems like the perfect caption as Douglas Edmunds referees at Odd Haugen’s 2001 Beauty and the Beast strongman contest.  IronMind® | Randall J. Strossen photo.


He harkens back to the days of Jon Pal Sigmarsson, he introduced tacky to the Atlas Stones and he was the commander in chief of the original IFSA—but even those highlights scarcely give him his full due.

Asked about strongman now, Edmunds mentions “the lack of character, little innovation” and points out the competitors are “morphing into one person: bald, tattoos, monotonic speech.  Where’s the Brad Pitt of strongman?”

Edmunds calls for “new events, and revamping the old stuff,” and he talks about giving the competitions a more futuristic feeling, but he also cites the need to create exciting events by tapping into dramatic locations and exotic cultures.

Edmunds said that strongman needs significant investment and a major refresh, and he talks about having challenges that are interwoven as part of a larger tapestry: steel bars bent to escape from a dungeon, stones lifted to clear a passageway, a portcullis raised by hand, pushing over a drawbridge . . . the final the step is an escape from a castle that depends on meeting a series of challenges along the way.