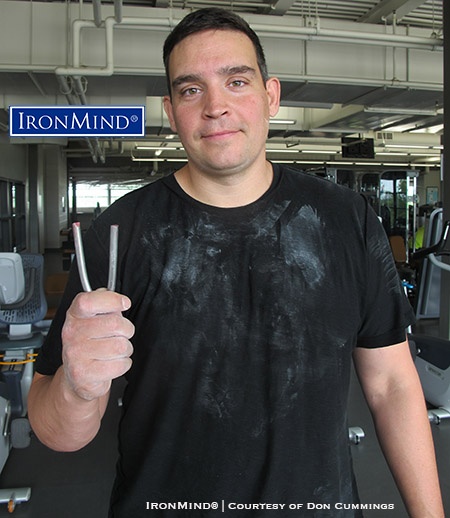 “I began strength training at a young age with my dad, who was a powerlifter when he was in the Marine Corps,” Don told IronMind.  “I played football and wrestled growing up.  I wrestled in college.  Grip is very important for wrestling.    “Later, rock and ice climbing became my main passions.  I began really researching grip training to help with climbing.

“I began steel bending in early 2016, with the goal of bending the Red Nail.  It took about a year and a half of consistent bending 1-2 times a week to bend the Red Nail.

“I am absolutely obsessed with steel bending now and have branched out to doing other types of bending, including reverse bending, double-underhand bending and steel snapping.  I love the challenge that steel bending provides.  I have always needed a goal to train hard for. At first, it was wrestling and football.  Later, it was climbing and now it is steel bending and grip strength.  I will continue my journey in bending and try to bend harder and harder steel.

“I would like to thank my wife and kids for all of their support, the benders across the country and around the world who have given me encouragement, my referee for taking time out of his schedule and IronMind for making this opportunity possible and providing so many great training tools.”