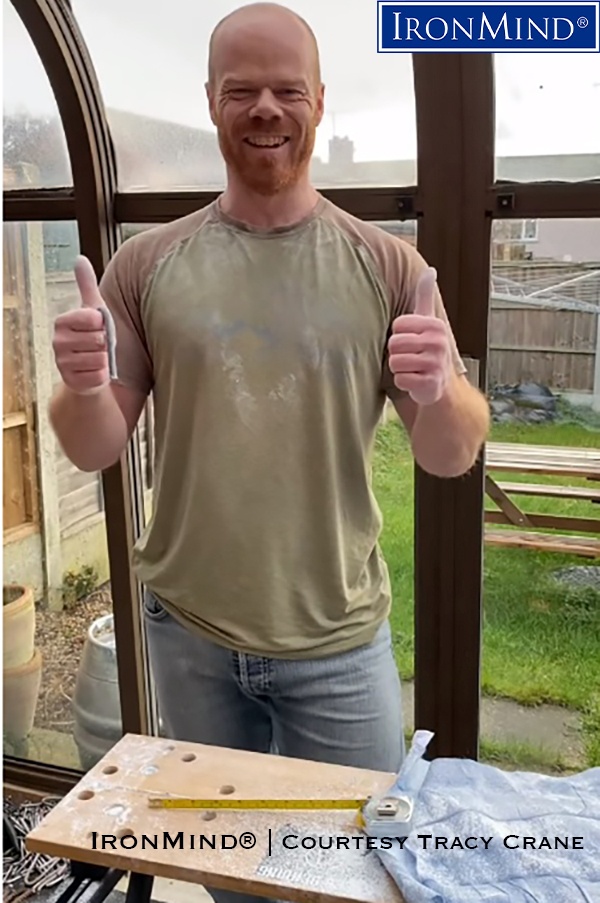 Dom Crane told IronMind he’s been only been bending nails for about a year, but by building on his base as a powerlifter and strongman, he just got certified on the IronMind Red Nail, a benchmark bend known worldwide.

“I’ve been strength training since aged 9 for fun and started powerlifting in my early 30s, getting to a British national level.  I later transitioned to strongman and competed at many top-level events, being Europe’s Strongest in 2018 (placed 8th), Official Strongman Games in late 2017 (placed 15th in the world) and Arnolds Amateur Strongman (placed 16th) in early 2017, all at under 80 kg bodyweight.

“Among my best lifts were 250kg deadlift, 240kg squat, 120kg log press and a 180kg atlas stone on my 40th birthday.   “In 2019 I discovered some damage to my back which was squashing my spinal cord and had surgery to remove part of a vertebrae, so I chose to focus on grip going forward. While waiting for my operation I turned to grippers for training and managed to close an IronMind (Captains of Crush) No. 3 gripper.     “At the start of the COVID situation and our first national lockdown, all suppliers were sold out of home gym equipment, so I bought a IronMind Bag of Nails from Pullum Sports and my journey into bending began.  The first time I tried to bend an IronMind nail, I could manage the Blue.

"In the future I hope to get back to competing at the Arnolds but for arm-lifting this time around.  I’ve also competed at King-Kong Grip,” Dom said.

Summarizing his training, Dom told IronMind, “I tend to bend twice a week, although I have been doing it a little more regularly since we’ve been in COVID lockdown and gyms have been shut, this has been my go-to training during this time.  Workouts vary but are typically using Yellows and Blues as a warm-up, working up to something heavy/difficult, snapping a Red in around 3 minutes.  Sometimes I’ll combine other things, such as grade 8 bolts or tape 2 Blues together for an alternative challenge.  Occasionally I’ll incorporate some middle-length bars for variety.”

Congratulations, Dom—it’s official: you have been certified on the IronMind Red Nail and you name has been added to the Red Nail Roster!