He won the Arnold strongman contest and the Super Series Mohegan Sun earlier this year, so when IronMind® asked Derek Poundstone about the 2010 MET-Rx World’s Strongest Man contest, his comments carried substantial gravity. 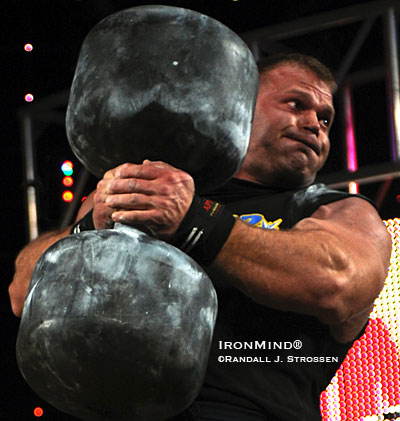 Derek Poundstone’s strongman career has been characterized by some standout performances, and his string of victories is missing only one big title—the biggest one in the field.  Poundstone is looking to plug that hole this year, as he comes into the 2010 MET-Rx World’s Strongest Man strong, confident and on a roll.  IronMind® | Randall J. Strossen photo.


“I'm feeling good and want to keep my winning streak going this year.  I feel great about the events and am by far the strongest I've ever been,” said the man who has a pattern of making good on his predictions.

Referring to a video his fiance is editing, Poundstone said, “Kristin's putting together some of the insane training I've been doing, but [what’s] most important [is] what I haven't been doing.  I've stopped trying to prove to myself that I'm the strongest with my training.
I'm training smarter and focusing more on rest.  This has been how I've trained since prior to the Arnold.  So all in all I'm feeling good and the events are great for me.”

Not one to idle away his time, Poundstone told IronMind®, “I'm heading to South Africa on Saturday for a convention on behalf of Solae, then [to] Japan for a TV show next weekend.”

Just another weekend in the life of an aspiring World’s Strongest Man winner.