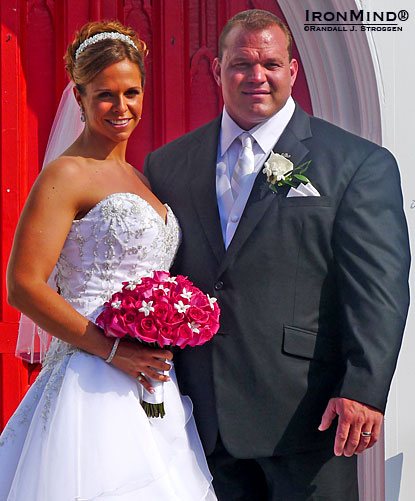 Ever seen one of those custom tailor ads that boasts they can suit up anyone in style?  Give the guy who made this jacket fit Derek Poundstone an A+.  Kristin and Derek met at the 2008 Mohegan Sun Grand Prix, where Derek made a bold prediction and had a big day that led to an even bigger one. IronMind® | Randall J. Strossen photo.


The lavish reception at Cascade (in Hamden) was awash in food, drink and merriment as the hors d’oeuvres hour was followed by a Hollywood-like introduction of the wedding party as they cascaded, couple by couple, down a grand staircase, with the bride and groom providing the crowning cherry.  Toasts, videos, dinner, and that was just the beginning, as friends, family and the strongman community were part of the festivities.

Congratulations, Kristin and Derek—enjoy your honeymoon and we’re looking forward to seeing you again later this year at the World’s Strongest Man contest.