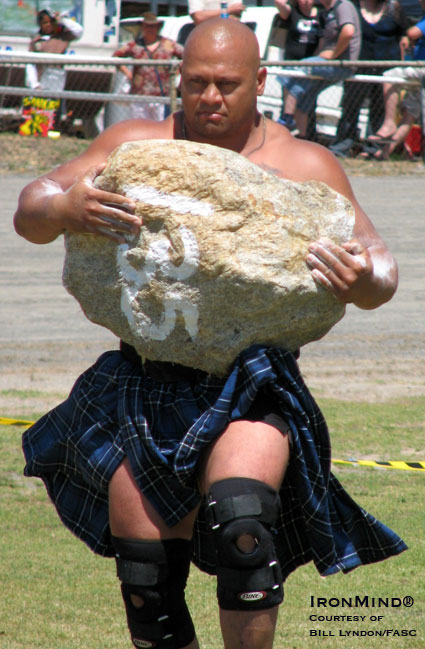 Derek Boyer has been added to the field at Fortissimus. IronMind® | Photo courtesy of Bill Lyndon/FASC

Using a prepared statement, Fortissimus made the following announcement:

“Veteran of a number of WSM contests and new WR holder of the 160-kg Farmer's Walk on a 50-m course, Derek Boyer, the Fiji Islands native widely known as the ‘Island Warrior,’ has been confirmed as the ‘14th warrior’ by Fortissmus World Strength, Aussie Power, and the Federation of Australia Strength Competitors ( FASC).

“Back in May 2008, we had an agreement with Australia's strength sports officials. We had agreed that the Fortissimus all-inclusive concept would recognize the best strongman of Australia/Asia. It took a year to make it happen and we are happy that all parties cooperated fully,” explained Paul Ohl, president of Fortissimus World Strength. “Derek Boyer is more than a strongman of international caliber, he is the living symbol of a rich culture originated in the Pacific Islands and a worthy spokesman of the values of the sport of strongman,” added Paul Ohl, as he made reference to the battle Derek Boyer sustained against diabetes.

Aussie Power and the FASC released the following statement under the signature of their president, Bill Lyndon:

“Aussie Power and FASC are proud to announce that Derek Boyer was selected to compete at this year's Fortissimus, as a direct result of Derek winning the Australia's Strongest Man this month in Lismore, NSW. Derek is in the best shape of his life. He said: 'It is a great honour to be selected for such a prestigious event and I will do  Australia and Asia Pacific proud showing that they build them strong Down Under.' As a veteran strongman athlete Derek looks forward to competing against the new breed of strongman and has no disillusions [sic] about how tough the challenge will be and looks forward to the battle.”