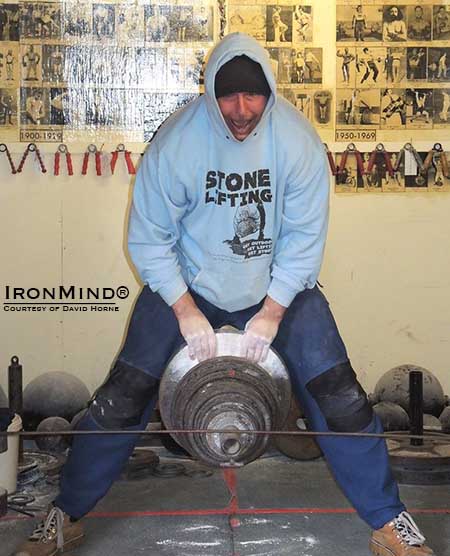 David Horne broke the world record on the adjustable two hands pinch grip device he developed and that has become a staple in the many grip strength contest he organizes and promotes.  IronMind® | Photo courtesy of David Horne.


“The last time I held the record was in 2010, and then I watched Laurence Shahlaei take it by a very small amount thirty minutes later.

“I am over the moon with my Two Hands Pinch Lift World record. I only took three attempts (no warm ups either), 109.5 kg, 117.81 kg and then 122.91 kg. I still had an attempt left, but my skin had torn quite badly by then and it wasn't worth going for it, and damage it further and be out of training.

“I have trained 14 weeks for this, and it is part of a 40-week plan to first get the record, and now move it higher. So I'm really looking forward to more hard and thoughtful training, and hopefully more records,” said Horne.

For full results from yesterday’s contest, please follow this link.