Charleston, West Virginia - Building on his strong performances earlier today, Dave Ostlund capped off the first day of the finals at the 2008 MET-Rx World's Strongest Man contest by winning the Fingal Fingers, putting himself in the lead when the action resumes tomorrow. 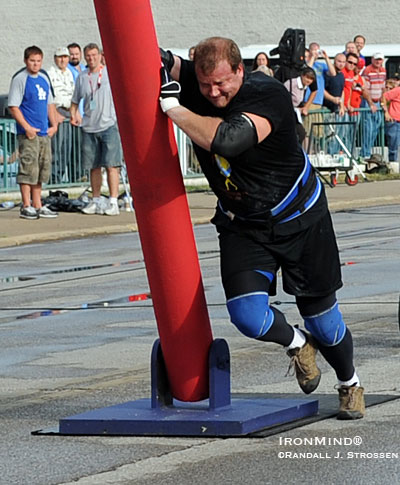 Dave Ostlund heads for home after flattening the final Fingal Finger. Ostlund won the event and finished in the lead overall after the first day of the finals at the 2008 MET-Rx World's Strongest Man contest. IronMind® | Randall J. Strossen, Ph.D. photo.

Phil Pfister was second in the Fingal Fingers, Sebastian Wenta was third and Derek Poundstone was fourth.

Overall, after the first day, here are the top four: