A few years ago, Odd Haugen pegged Dave Ostlund as “the future of strongman,” and when Ostlund made the World’s Strongest Man podium in 2008, Haugen was looking smarter than ever. 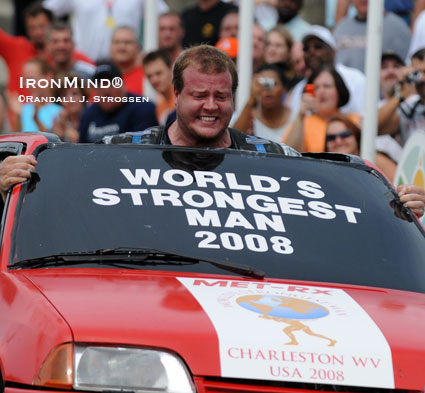 Dave Ostlund was in the driver’s seat at the 2008 World’s Strongest Man contest, where he finished in third place - his first visit to the WSM podium.  IronMind® | Randall J. Strossen photo.


Misfortune struck at the Arnold earlier this year, though, when Ostlund tore his left biceps on the stone-for-reps event.

“Coming off the floor, my left arm just slipped off . . . it felt like a localized, intense cramp . . . I couldn’t apply any power to the stone,” Ostlund told IronMind®.

And for good reason, because it turned out that Ostlund had a 95% tear of his biceps, enough to put him out of action, essentially, until his comeback in Malta at the World’s Strongest Man contest later this week.

Ostlund, always good for an analytic approach to his game, said that he’s not even going to think about the qualifiers at first - it’s head down and full steam ahead through two events, he said, before he’ll take stock of his relative position.  Ostlund’s in a group with Andrus Murumets, Christian Savoie, Florian Trimple, Jarek Dymek and Terry Hollands, with only two of them going on to the finals.

Being cautious, Ostlund is quick to point out that Hollands’ training is said to be going very well, that Dymek is supposed to be in the best shape in years, that Savoie is coming off his biggest year yet in Canada, and as for Murumets, he’s making some short lists for the top spot in the finals.

Dave Ostlund did over a dozen contests in 2005, but now, being sidelined since his injury, he said that all the rest means he’s free of a lot of little injuries, aches and pains that have been steady companions in earlier years.  Now, he explained, squatting isn’t the touch-and-go situation it’s usually been - his knees and the rest of his body feel fine, and that might be just the ticket he needs to get back on the World’s Strongest Man podium again this year.