As the Highland Games continue to grow in popularity worldwide, Hungary held its team championships and IHGF vice president Francis Brebner reported the action for IronMind. 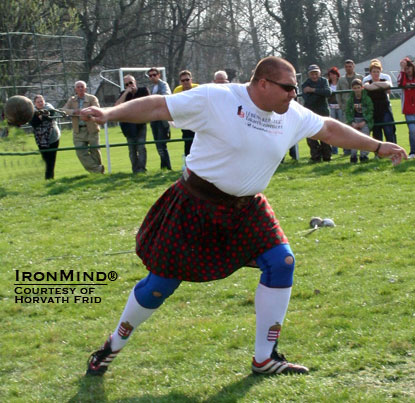 This weekend in the city of Lebeny west Hungary vast crowds turned out to watch the Hungarian Highland Games Team Championships which drew its share of media attention and was filmed for local TV.

With perfect weather conditions, four new national records were established between the four Hungarian teams competing in the championship:

In the opening event with the 22-lb. hammer it was real ding dong battle between the top two athletes Darazs and Csaba, with Darazs having all three throws over the existing national record, but in the end it was Mészáros "CSIBE" Csaba the Hungarian giant who claimed the first win of the competition with a distance of 70' 1-3/4”.  In second place was Adam Darazs with 69'  2-1/2” and in third place was Róbert Mészáros with 62' 2-1/4”.


The next event with the 56-lb. weight over the bar saw the second national record fall as the mighty Ákos Nagy, who is a two-time weightlifting junior world champion of Hungary, hit 15’ 7”.  In second place was Adam Darazs, with a height of 14' 6".

The caber, which was 16' in length and just over 100 lb., was won by Adam Darazs with a perfect 12 o'clock toss; in second place was Ákos Nagy and his team partner Róbert Mészáros was in third place.

In the 16-lb. Braemar stone, the third national record was broken when Gábor Kránitz threw of 44' 5-3/4”.  In second place was Adam Daruzs with 40' 4-3/4” and Róbert Mészáros was in third place just a scotch behind Darazs with a distance of 40' 4"

Going into our final event with the 28' weight for distance it was Csaba Mészáros that won the event with a distance of 60'4"3/4 which notched up our fourth and final national record of the Hungarian team Championships , in second place was Róbert Mészáros with 58'9"1/2 and in a very close third place was Ákos Nagy with 56' 5".

These are overall team standings:

Asking Darazs how he felt about the over all competition he said that he was very happy and was pleased enough with his performance despite having been kept busy opening his new gym, which has left him very little time for rest.

Highland Games are blooming in Hungary and there is a very big interest in the sport with a very large following of fans and supporters.  The next major event to be held in Hungary is in early July, when the IHGF European Amateur Highland games Championships will be hosted.
At the moment the IHGF are in the process of finalizing selected Athletes to compete in the European Championship which will be released soon.

IronMind Forum: Want to comment on this article, talk strength or get motivated for your next PR?