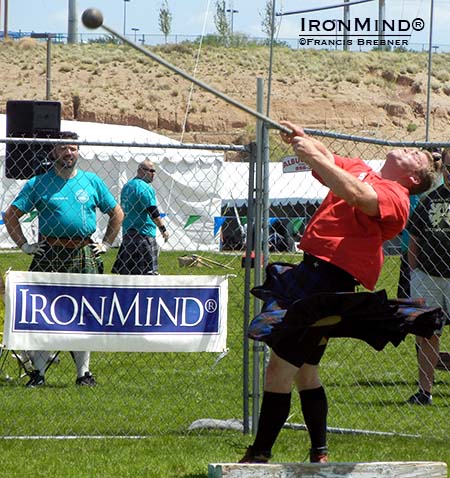 The Rio Grande Valley Celtic Festival celebrated its 26th year of games with perfect weather conditions and record crowds, and Dan McKim undoubtedly had the best series of hammers known to date.  McKim, the current IHGF world champion, captivated spectators with an all-round world-class performance, adding to the pages of Highland games history by setting a new world record in the 22-lb. hammer with a throw of 129’ 11-1/2”, beating Matt Sandford’s record of 129’ 10-1/2” set in Halkirk, Scotland in 1997.

In the 20-lb. sheaf-over-bar, Stewart was on a high, winning with a captivating throw of 32’.  Second place was skirmish between Kasson and Pilling, both making their debuts in the professional ranks.  Tying at 30’, Kasson claimed second place with fewer attempts, leaving Pilling in third.

The caber was 19’ 8” long and 132-lb. and proved to be a worthy stick as only two athletes managed to successfully toss it.  McKim lofted a perfect 12:00 for the win and Williams came in second with 1:00.  Stewart took third with 75 degrees.

All in all, the Rio Grande Valley games was a perfect setting for McKim to rewrite the pages of Highland games history.  He came to these games in fantastic throwing condition and produced a stunning all-round performance, establishing the best-known series of throws in the 16-lb. and 22-lb. hammers, with five throws over 150’ in the light hammer and five throws over 125’ in the heavy hammer, with three of them over 129’, and setting a new world record 129’ 11-1/2” to cap it off.

It was not long before news of McKim’s accomplishments with the hammers was received by Australia’s Matt Sandford, a five-time world champion and the former world record holder in both hammers.  Matt conveyed a message through me to pass on to Dan, congratulating him on his awesome throwing and the new world record in the heavy hammer.