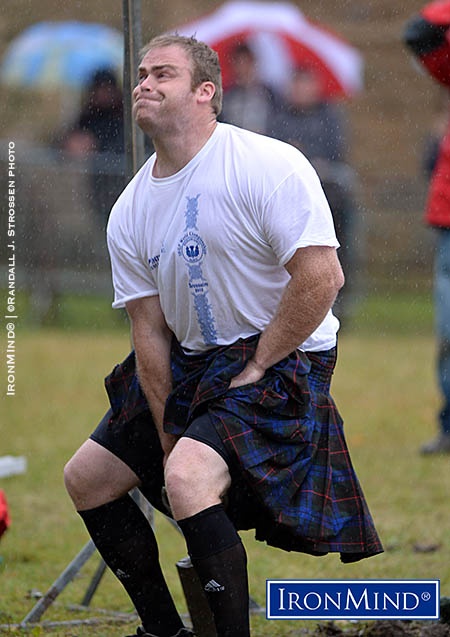 The two-day competition began with the open stone, where Dan McKim posted a relatively weak performance, but McKim proved he has the heart of a champion as he fought his way back up through the ranks. On the final event—throwing in pouring rain—Dan McKim was the only man to clear 16’ 9” in the 56-lb. weight for height, to win both the event and the overall 2015 International Highland Games Federation (IHGF) World Championships. IronMind® | ©Randall J. Strossen photo

Bressuire, France—Driving rain only added to the authenticity of the 2015 IHGF World Championships and did little to deter the enthusiasm of either the world’s top Highland Games heavy events athletes or the fans swarming the picturesque Chateaux de Bressuire as sticks, stones and mud flew through the air. Elizabeth Hammond called the action for IronMind.

From start to finish, it was a glorious Highland Games World Championships—and Dan McKim emerged the victor after a two-day, back-and-forth battle with Matt Vincent.  Both athletes fought valiantly, and went into the last event, the weight-over-bar in a tie. But while McKim cleared each height on his first attempts, including the final 16’ 9” (5.10 m), Vincent stumbled at 15’ 9” (4.80 m), first missing and then making it, and then missing and making 16’ 3” (4.95 m), with 16’ 9” eluding him altogether.

Amidst the jagged ruins of the Chateau de Bressuire in a French setting, replete with wet weather, that would do Scotland proud, the 2015 IHGF Highland Games World Championships was an organizational triumph for Jean-Louis Coppet, president of the Association des Jeux d’Ecosse en France (AJEF), whose friendly, capable team, ran a superb games, with top announcer Alain Cadu keeping the crowd engaged at every step.

And engaged they were—rain or shine—with an incredible display of support and enthusiasm for all the athletes, urging them on at each throw with chants of “Allez, Matt; allez, Matt” or “Se-Bas-Tian” clap-clap-clap. The capacity audience, including many families with children lining the fence and covering the hillside, was completely involved during the entire games, and it made for two exciting days of non-stop athletic excellence.

Top heavies like Scott Rider, Lucasz Wenta, Sebastian Wenta, Matt Doherty, and Craig Sinclair kept the pressure on Vincent and McKim in every event, with Rider throwing a field record in the 8-kg (17.64 lb.) open stone at 54’ 9” (16.69 m) and along with Lucasz Wenta, turning the massive and elusive 20’ 4”, 160-lb. (6.20 m, 73.2 kg) caber in all three tries (Vincent did it a single time—and none of the others managed the feat). Matt Doherty, who won the heavy hammer, was a strong third overall.

IHGF’s Francis Brebner, who was honored as chieftain of the games on day two, and Ryan Vierra, principal judge, were helped by an able crew, including Al Myers, Chad Ullom, and Adam Darasz; and the bustle of TV crews, athlete and dignitary interviews, tribal drum and bagpipe rock band, and of course a traditional pipe band all added to the festive atmosphere.