Dan McKim added another feather to his cap this weekend as he won the International Highland Games Federation (IHGF) World Championships in Dana Point, California. 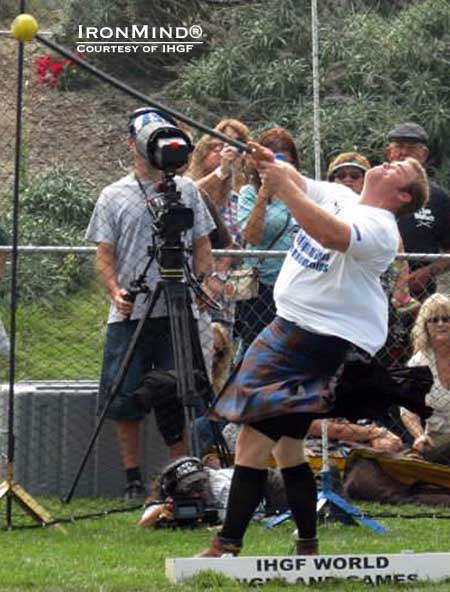 Dan McKim on the Scottish hammer at the 2013 IHGF World Championships, which McKim won.  IronMind® | Courtesy of IHG


Highland Games and Southern California have a history of mixing well and the IHGF World Championships held in Dana Point this past weekend were no exception.

IHGF spokesman Francis Brebner called the competition, “a massive success, “ and told IronMind, “This is the very first time that a games of any kind had been held in Dana Point.  Organized and promoted by the City of Dana Point and EventWerks, they did an outstanding job of putting everything together and left no stone upturned when it came creating a truly Scottish Highland Games atmosphere which included pipe bands, dancing, fiddle and harp music, the clans, battle reenactments, traditional Scottish music, Scottish food, children’s glen, etc.

“Thousands turned out each day to watch twelve of the world’s top Highland Games athletes battle it out over two days of the most  heated competition I have ever witnessed at any world championships.

"What an honor it was to be a part of such an amazing event," Dan McKim told IronMind.  "The IHGF put on a spectacular show with huge crowds, great implements and the top athletes in the world.  When I started this sport nine years ago, I had no idea I'd be fortunate enough to compete at this level, travel across the globe or meet this many amazing people.  God has been incredibly gracious to me and my family with this blessing."