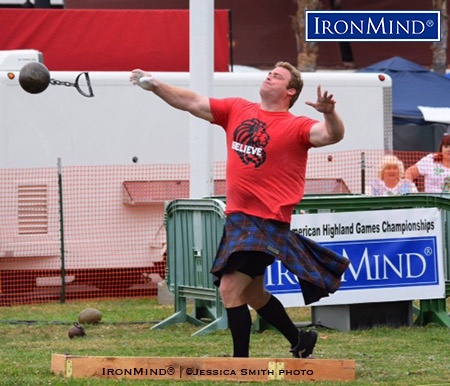 In the 24-lb. Braemar stone, A. Vincent took charge from the first round, ending with a class putt of 43’ 1-1/2” for the first victory of the competition. Second place was a tight battle, round after round, between McKim and M. Vincent, with M. Vincent nabbing second with a putt of 41’ 1-3/4”, leaving McKim in third at 41’ 1/2”.

The competition caber, which was 17’ 4” long and 125 lb., was riveting for the crowd as McKim and A. Vincent slammed not one but two 12 o’clocks, tying for first and sharing the win. Kahanic placed third, pulling out a 12 o’clock in his last attempt.

The 56-lb. weight-over-bar was remarkable, with five athletes clearing 16’ and A. Vincent taking the win at 17’ and just missing 18’. Four athletes cleared 16’, with O’Neil and McKim sharing second place.

A big mention must be made of Dan Tennison, who dominated the A group, pulling a best of 58’ in the 16-lb. open stone for the win and 44’ 5” in the 24-lb. Braemar stone. So far this year on the international games circuit, he has the biggest putts recorded in the Highland Games, and I predict we are looking at a future champion in the sport.