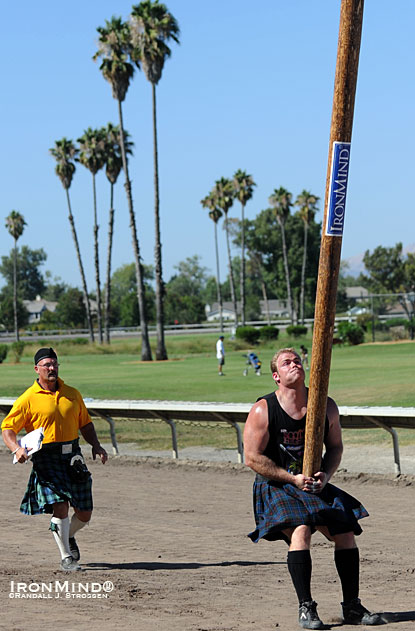 The IronMind caber debuted this weekend at the Caledonian Club of San Francisco’s 145th Scottish Highland Gathering and Games.  On Sunday, Dan McKim, who had just won the overall title, added the 2010 IHGF World Caber Championships as well, turning the big stick specially made for the occasion by the California Caber Company’s Frank Lux and Kit Sonneson.  IronMind® | Randall J. Strossen photo.

Headed into the final event, things were tight, with Mike Pockoski trailing Dan McKim by three points, and Sean Betz, just one point behind Mike, was considered the strongest in this final challenge: the light weight for distance.  Betz showed that early calls of his success were well warranted, as he uncorked the winning throw, 84’ 4”, while Harrison Bailey III earned second place with 83’ 4” and Mike Pockoski took third via his 82’ 2” throw.

How close was the battle for the prestigious title?  Sean Betz and Dan McKim were tied at 21 points, with Dan taking the title on countback, and Mike Pockoski was in third place, only one point in arrears.

After Mike Zolkiewicz’s blistering throws on Saturday, the sky seemed to be the limit, but maybe when a connecting link broke on the original weight, it symbolized that the magic spell had been temporarily broken.  The new weight wasn’t turning itself over like the old one, Mike Z told IronMind, which is why his throws were still going sky high, but then coming straight back down.  Still, the man who could say, “I’m going to throw 19 feet,” and have people believe him, won.  Following Mike Zolkiewizc, Dave Brown of sling ‘em high fame took second, and 2009 IHGF World Heavy Events world champion Aaron Neighbour took third.

Meant to be a challenge, the IronMind caber was introduced to the world the previous day and the handcrafted creation of Frank Lux and Kit Sonneson from the California Caber Company proved so formidable that it received a haircut that night, taking a foot off its top.  That, plus having the title at stake, was all that Dan McKim needed to turn caber, take the IHGF World Caber Championships victory and polish off his weekend in a big way.  Mike Pockoski was second and Harrison Bailey III was third. 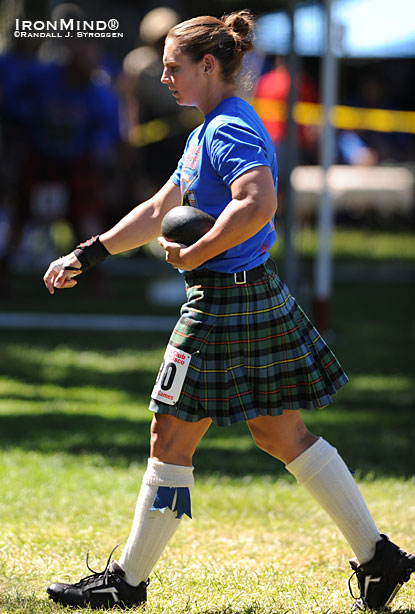 
In the race for the women’s U.S. Heavy Events Championships, Adriane Blewitt consistently edged out Summer Pierson as she “won 7 of the 8 events while setting 2 new field records - 51'9" in the open stone and 46' 10-1/2" in the heavy wt. for distance,” Athletic Director Steve Conway said.  “Summer  Pierson won the caber and placed second in all the other events,” said Conway.  In the Sunday U.S. Championships for caber and weight for height, Summer came out the winner on both, as Adriane waited to come in at a high height and no-heighted.  Summer is clearly better on the caber while Adriane is still trying to get the feel for it,” Conway explained.

And speaking of Steve Conway, the longtime athletic director for these games and an official at top Highland Games competitions worldwide—the man who puts together the pieces to make the heavy events happen for the Caledonian Club of San Francisco and many ten of thousands of fans year after year—was honored for his contributions by the International Highland Games Federation, as was IronMind’s Randall Strossen, for his work covering and promoting the sport. 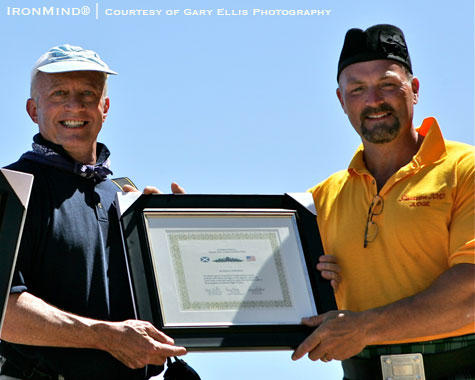