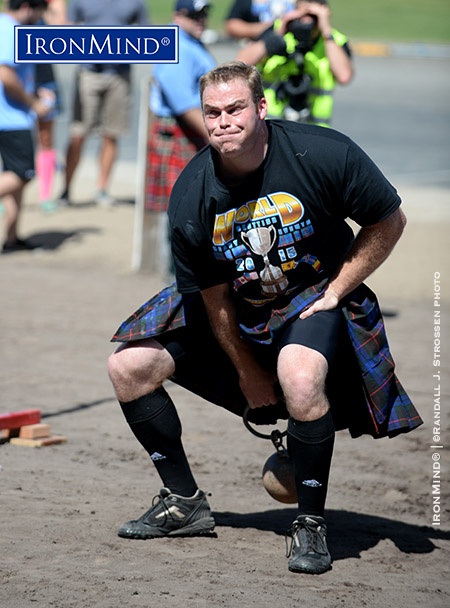 Dan McKim loads up in the 56-lb. weight for height, where he shared the event win with Mike Zolkiewicz. IronMind® | ©Randall J. Strossen photo

Dan McKim started the day by finishing in sixth place in the first event at the 2015 World Events Championships, but by the end of day, he was in the lead.
IronMind’s Elizabeth Hammond reported from the field.

After heavy implements were thrown and the dust had settled, Dan McKim was in the lead by a slim 1-1/2 points over Matt Vincent at the 2015 World Heavy Events Championships in Pleasanton, California.   Hosted by the San Francisco Caledonian Club at the 150th Scottish Highland Gathering & Games, and ably managed by athletic director Steve Conway, the world championships was off to a sizzling start, even though the weather stayed temperate.   Noted strength historian David Webster OBE, who has been the announcer at these heavy athletics for over 30 years, is being honored as Honorary Games Chieftain and this is his farewell year at the mic. As David called the shots, McKim edged his way up after starting in sixth place in the Braemar stone to Vincent’s second place finish, and ended in first place after a winning series of tosses in the caber, including a perfect 12:00.

Tomorrow morning, the world champion will be decided after the final three events, and then it’s on to the U.S. Invitational Championships in the 56-lb. weight-for-height, which will feature special guest World’s Strongest Man competitor Hafthor Julius Bjornsson, of Iceland, known to many as The Mountain from his role in the television series The Game of Thrones.