Dan McKim lowered the boom on his fellow competitors at the Costa Mesa Highland Games, with a decisive win that included a personal best in the 56-lb. weight for distanc—IronMind has a report by IHGF president Francis Brebner. 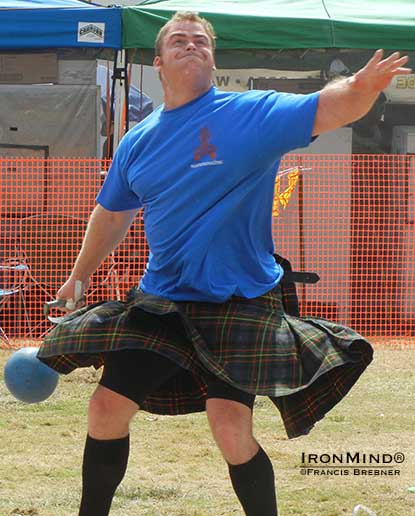 Dan McKim hit a personal best 46’ 6” throw in the 56-lb. weight for distance, on his way to an overall victory at the 2013 Costa Mesa Highland Games.  IronMind® | Photo by Francis Brebner.

The Costa Mesa Highland Games in Southern California this past weekend attracted mass crowds over its two days of festivities.  Over a 100 athletes competed in perfect weather, producing some fantastic throwing in all categories.

The pro class had a top-notch line-up of athletes, including Dan McKim, Rusty Price, Jon O’Neil, Jake Sullivan, and the new kid on the block competing in his first pro games, Guat Vail Howard.

Our first impression of McKim this season was how much bigger and stronger he looked than last season, and it showed with his dominating overall performance, winning every event.

At this point, mid-afternoon in the first day of competition, SAAA president Dave Garman introduced the 21-caber veterans’ salute, which went over very well with the thousands of spectators.

The competition caber, which was 18’ 10” long and 130 lb., was very exciting to watch, with the win again going to McKim with three perfect 12 o’clock tosses.  In second place was O’Neil, who has been working hard on his caber, executing perfect timing with two 12 o’clocks.  In third place was Price with an 85-degree attempt.

The final event of the first day was the 56-lb challenge weight over the bar, which consisted of throwing a 56-lb. anvil with a ring attached, legal in length and weight.  McKim set a new field record of 16’ 7”.

The 20-lb. sheaf toss was won at a height of 32’ by McKim.  In second place was Sullivan with fewer misses than third-place O’Neil, both at 30’.

The final event with the challenge caber, boasted to be the biggest in the country at 18’ 3” long and 165 lb., with no taper at all, proved a real challenge for all the athletes, and the event was won by McKim with a best of 80 degrees.  The highlight of the competition was the world record attempt on the most number of cabers tossed simultaneously in the air:  a new record   of 36 was set and it was a thrilling sight to behold for the crowds.

Dave Garman, president of the SAAA, was delighted with how the weekend of Highland heavy athletics went and the many new athletes in the novice division competing for the first time.