Dan Harrison won Southern California’s Strongest Man this weekend, but don’t think it was a stroll on the beach. 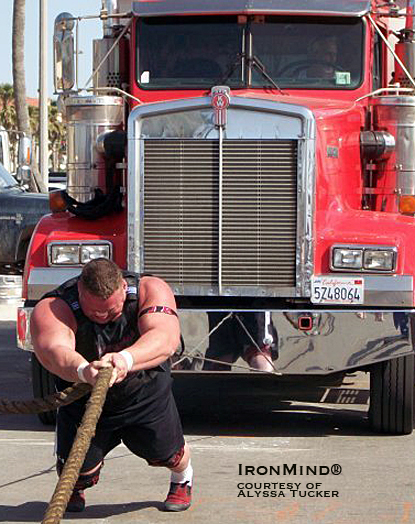 The truck pull provided the perfect proving ground at the the 2010 Southern California’s Strongest Man contest: Dan Harrison had the horsepower to move the truck, and he motored into first place.  IronMind® | Photo courtesy of Alyssa Tucker.


“It was a crazy day; my main competition [defending champion] Erik Peterson (2nd place at NAS Nationals 2008), and I were neck and neck on the overhead medley, keg toss, and death medley, but he and nearly everyone else failed to get the ultra heavy truck pull started.  I was able to pull it 28 feet for the overall lead, and then I finished by winning the stones . . . It was a great day,” Harrison told IronMind®.

Looking forward, Harrison said, “Next for me is NAS Nationals in November in Reno, Nevada.  I might do a powerlifting meet in September to break my raw total PR of 2,066 lb.; hope to get 2,100+ raw there!”