When IronMind® introduced its Bag of Nails™ in our 1993 catalog, we noted, “Right in there with such classic feats of strength as cleaning and jerking 300 pounds and tearing a deck of cards in half is the ability to bend a 60-penny nail into a U.”  In the following years, largely inspired by John Brookfield, legions of people have come to wrestle with short, defiant pieces of steel - with the IronMind® Red Nail™ serving as the standard for superior strength, well above the 60-penny level. 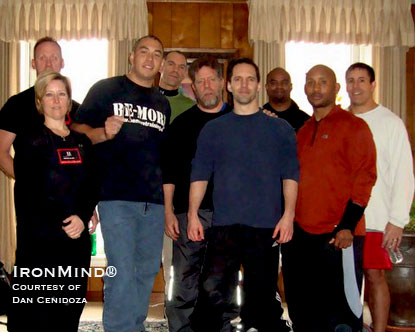 In 1996, IronMind® began to recognize people who had bent the Red Nail™ under official conditions, certifying their performances, and we are proud to announce that Dan Cenidoza has just been certified and his name added to the official Red Nail™ Roster.

Dan has won the Maryland's Strongest Man contest, and says that he “enjoys bending metal, lifting heavy things and [taking] long walks on the beach.”  Dan owns Be-More Training, and to give you an idea of how serious he is about bending steel, Dan said, “The legendary John Brookfield has given me his blessing to carry on www.ironbonsai.com.”