The Highland Games continue to spread and past weekend, Hungary’s Csaba Meszaros set a novice world record in the weight for height in Ireland, in a Highland Games run by strongman Glenn Ross in alliance with the International Highland Games Federation (IHGF). 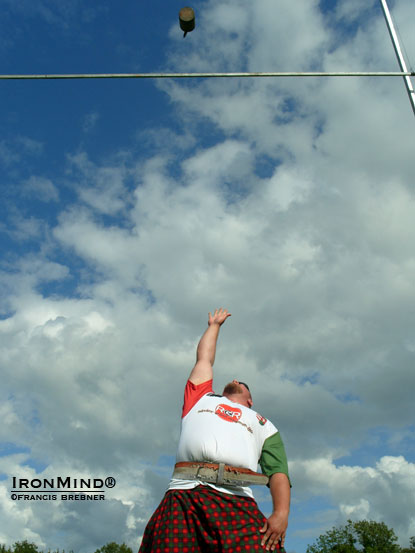 The massive and mighty Csaba Meszaros broke the novice world record in the weight for height at the NAAS RFC Highland Games in Ireland.  IronMind® | Francis Brebner photo.

The sky’s the limit for Hungary’s Csaba Meszaros as he set a new novice world record in the 44-lb. weight over the bar with a height of 18’10” at the NAAS RFC Highland Games in Ireland this past weekend, which was officially ratified under the rules and regulations of the International Highland Games Federation (IHGF), the world Highland Games governing body.  Meszaros, a massive man at 6’ 6” and 380-lb., smashed the world record of 18’ 9” previously held by Ireland’s Francis Kirby.

A 4-hour IHGF clinic which attracted 15 athletes took place prior to the competition.  Ireland’s Glenn Ross has done excellent work introducing young novice athletes to the sport of heavy athletics with his Irish Highland Games open and novice series, and now more than 30 athletes are taking part in his events from all over Ireland.

The 28-lb. weight-for-distance event was also for the IHGF European Weight-for-Distance Championships, and Kelly took the honors with a throw of 62’ 3”.  Meszaros was second at 57’ 9” and Darazs third at 57’.

The 16-lb. hammer event was also for the IHGF European Hammer Throwing Championships, and again Kelly prevailed, but not until after a very tough battle with Darazs, eking out the win on his last throw with a distance of 97’ 10”.  In second place was Darazs with 95’ 4”, and in third place Meszaros with 94’ 6”.

One of the highlights of the competition was Meszaros’s throw in the 44-lb. weight-over-bar establishing a new world record at 18’10”.  Second place was a tie between Darazs and Looney at 17’ 6”.

Meszaros, who has been training for only six months in the sport of Highland Games under the guidance of training partner and coach Darazs, has really come a long way in a very short time.  Darazs, known as the Godfather of Promoters in Europe, was delighted and proud to see Meszaros bring a world record back to their homeland Hungary.  Meszaros, when asked how he felt breaking the world record, replied, “I am flying high.”

Glenn Ross, who is Ireland’s representative for the IHGF, said he was very happy with the event and is looking forward to next year’s season. While in Ireland, the IHGF and Glenn Ross had meetings with several of Ireland’s top city officials with plans for Ireland to be part of the 2012 IHGF European Series, which will be televised in major countries throughout Europe.