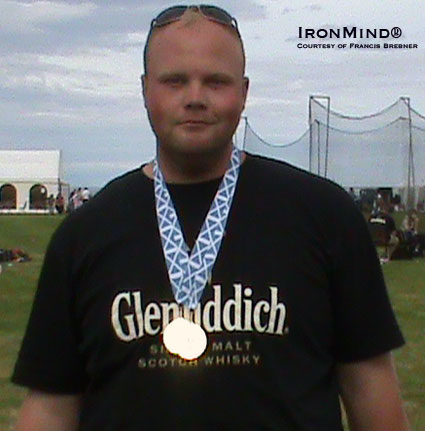 In the 16-lb. stone it was Britain's number-one ranked Highland Games shot putter, Scott Rider, who dominated this event by establishing a new ground record with a put of 57’ 1/2".  In second place was David Dawson  with a put of 53’ 2-1/2" and Aaron Neighbour came in third with a putt of 52' 7".

The 22-lb. stone once again witnessed another spectacular performance from Rider as he unleashed a putt of 47’ 2", with the Neighbour in second with 45’5", and Scotland's Jason Young in third spot with 42’ 6".

The next event was the 16-lb. hammer, which saw Craig Sinclair (who is currently Scotland's number one with the hammers) claim his first national title with a throw of 126’ 8".  Second place was a real  tussle between Neighbour and Rider, with Neighbour just going ahead for the win with a distance 122’ 11", and Rider getting third place with 122’ 6".

The 28-lb. weight for distance was a ding dong battle with the lead changing hands between Neighbour and Rider, with Neighbour eventually claiming the win with a distance of 78 ’8".  Rider was second and Sinclair was third.

The final event of the competition was the 56-lb. weight over the bar and it was won by Neighbour with a height of 15’.  In second equal was Young, Rider and Cleghorn - all at 14'.

Overall top three were as follows: