A little rain didn’t spoil the fun at the Oldmedlrum Highland Games, where the competition was so close that the final standings were decided on the last event.  Francis Brebner called the action for IronMind. 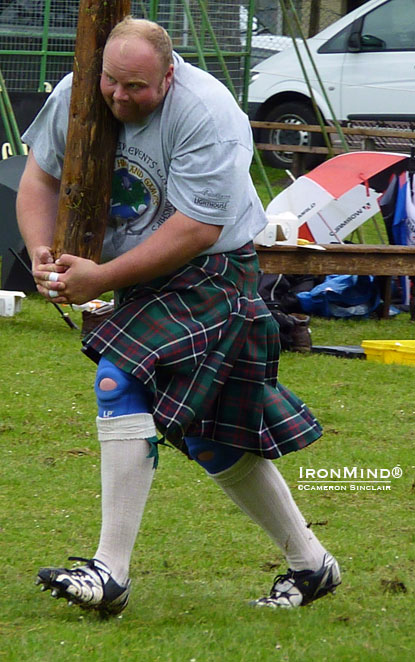 Despite a day of intermittent heavy rain, some good numbers were produced.  Only two throws were given each athlete because of the weather conditions.

Robb pulled out another leading throw of 43’ 1” in the 22-lb. shot and was now equal to Sinclair with two wins apiece.  Dowson took second with 41’ 8”, but Sinclair was hot on his heels and just inches behind at 41’ 3”.

The caber toss, which was for the 2011 British Caber Tossing Championships, used an 18’ long, 190-lb. caber.  Soaked with water which added extra weight, it was tossed successfully by only three athletes: first was Sinclair with a perfect 12:00; second, Robb with 12:15; and third, Colthart with 2:00.

The points could not have been closer between Sinclair and Robb going into the last event, leaving the 56-lb. weight for height to decide the overall winner.  Sinclair finally nailed the victory over Robb at 13’ 6”.  Second place was a tie between Robb, Patience, B. Aitken, S. Aitken, King, Anderson and MacLeod.