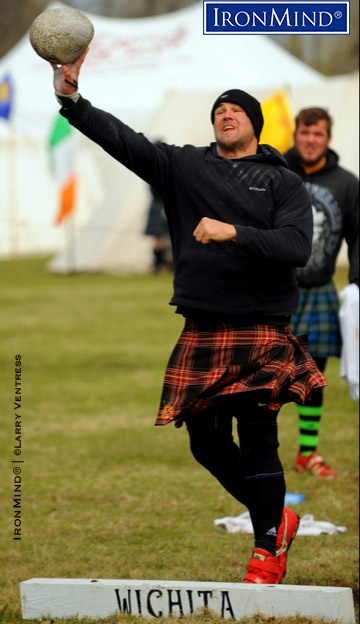 “The new kid on the block, Corey Summers, who has been throwing for just over a year, made a huge impact in his first IHGF qualifier, clipping Skylar Arneson by two points for the win,” reported IHGH president Francis Brebner, from the field of the 2018 Great Plains Renaissance Festival & Highland Games. IronMind® | ©Photo courtesy of Larry Ventress

Scotsman Francis Brebner called field conditions at the 2018 Great Plains Renaissance Festival and Highland Games “the coldest games I’ve ever been involved with in the USA . I was frozen to the core, but it was still nice with the enthusiasm of the athletes competing” and the “new kid” Corey Summers turned in an inspired performance.

Despite showers throughout the weekend, the athletes were not deterred in their throwing. The new kid on the block, Summers, who has been throwing for just over a year, made a huge impact in his first IHGF qualifier, clipping Arneson by two points for the win.

In the 22-lb. Braemar stone, Arneson, Summers, and Hereth were in the skirmish, with Arneson and Hereth tying at 37’ 10” and the win going to Arneson on countback; Summers took third with 36’ 1”.

The 56-lb. weight over bar was a special event for the title of IHGF All-American Weight over Bar Championships, and Summers excelled with a winning height of 16’, with a tie for second at 15’ between Arneson and Hereth.

The IHGF would like to thank Richard Cathey of the Great Plains Renaissance Festival for hosting the IHGF qualifiers; athletic directors Dave and Gunner Glasgow and Larry and Terri Ventress, who made it all possible; and Naughty Nurses BBQ, who fed 60-plus athletes and officials over the two days of competition.

The next IHGF All-American Highland games qualifier will be held in Albuquerque, New Mexico, 20–21 May 2018.