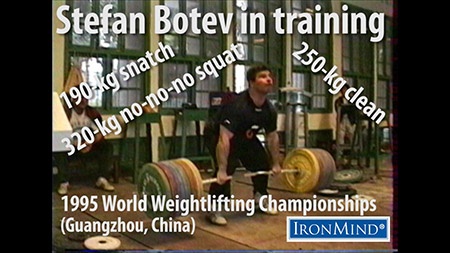 Stefan Botev in the final countdown to the 1995 World Weightlifting Championships—watch this superb weightlifter in a classic IronMind Training Hall video: riveting lifts that will bring out your best. IronMind® | ©Randall J. Strossen

Stefan Botev lifted for Bulgaria in the glory days of that international weightlifting powerhouse and then later represented Australia. Size-wise, Botev was notch down from the typical supers, but in terms of lifting, he was not far off their pace, and here’s your chance to follow Botev in his final training leading up to the 1995 World Weightlifting Championships (Guangzhou, China).

“One of Randall Strossen’s iconic IronMind Training Hall videos, it follows Stefan Botev through several successive days of training—both morning and afternoon—and it includes almost a dozen attempts in the snatch at 190 kg or higher, a 250-kg clean, and a 320-kg no-no-no squat.   “Appropriately enough, Botev went on to win the gold medal in the clean and jerk in the +108-kg class, doing 245 kg.

“Amazing stuff—and after you watch this video, you’ll want to train like a madman! Some lifters have watched this so many times, they have each workout memorized and can rattle off the lifts, weights, reps and sets. And watching any portion of this video pre-workout has been proven to produce PR performances.”