David Shaw just called IronMind® to say that Steve Merjanian confirmed as true the rumor that Chuck Ahrens had died earlier this month. 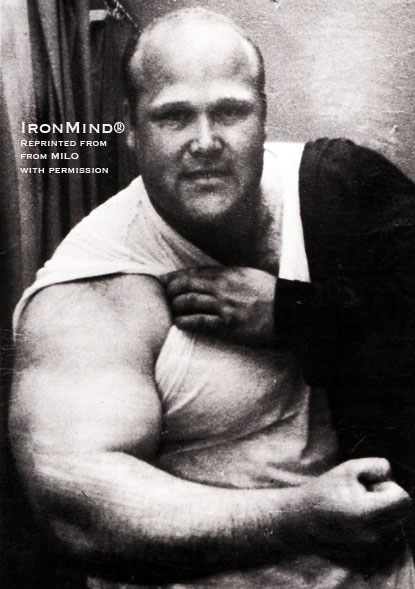 
Always a mystery man who shunned the limelight and who was rarely photographed, Chuck Ahrens was best known for his his massive shoulders and his prodigious pressing power.  Although Ahrens was the stuff of legends, it was argued in MILO®: A Journal For Serious Strength Athletes that if one considered the consistency of the reports along with the sources involved, it would be hard to conclude anything other than that he really did do things like a standing overhead press of around 300 pounds with one arm.

In his prime, in the late 1950s, Ahrens, who stood approximately 6’ 1”, weighed close to 300 pounds, and it was largely above his waist as he did virtually no leg work.  Later, when he reduced to about 225 pounds, he became even more reclusive, and is said to have quit training altogether.

May he rest in peace.